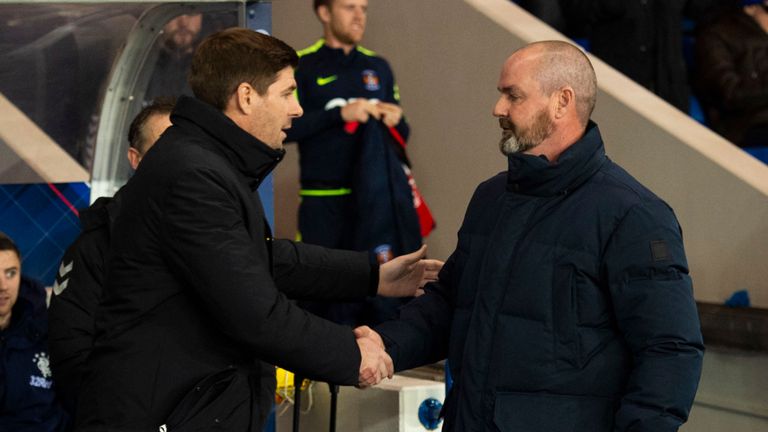 Without going into too much detail, this article is a ‘before and after’ of Steven Gerrard and Steve Clarke.

It shows just how badly Clarke has destroyed the relationship he once had with Gerrard, and questions why:

“I enjoyed working with Steve very much. I absolutely loved his sessions as a player. He’s a top man – someone I have enormous respect for as a coach. He is an experienced football man who knows the game.” –18/08/18 Steven Gerrard

“The thing for me with Clarkey is he’s real. He doesn’t try to pretend and try and be something he’s not. He’s open and he’s honest. As a player, he’d say to me: ‘I didn’t think you were at it today.’ Sometimes he’d say: ‘I thought you were very good today.’ That honesty and respect for me went a long way because I think players at the level that Clarkey has played at and worked at can work you out. Why do it any other way? Players are quite clever, they are cute, they are streetwise, they work you out pretty quickly.” –23/01/19 Steven Gerrard

“[Exasperated is] a good word. I think I find myself increasingly disappointed. Nothing’s being done to address it. Nothing. One of our players was suspended for two games for going to ground too easily earlier in the season. There was a media furore. A witch hunt against the player. Nothing on the same scale from Saturday’s game between Rangers and St Mirren. Nothing. Hopefully the compliance officer will do her job. It doesn’t affect us. I’m not particularly advocating but i just want consistency. So if our player gets a two week ban then I look forward to seeing what happens this week.” –04/02/19 Steve Clarke

“I’m surprised by Steve’s comments and disappointed by them as well. I think it lacks class when you try and get an opposition player banned for two games when you’re about to play them in two games’ time. We played Kilmarnock there on the astroturf and there was a clear red card on Ryan Jack right in front of us and I purposely didn’t mention it in the media out of respect for Steve Clarke and Kilmarnock and also out of respect for the player who was involved in the tackle. So I’m very disappointed that he’s trying to get one of my players banned. That’s not Steve Clarke or the Steve Clarke I know. He is always a man who carries himself with class. I’m disappointed by his comments. If Steve Clarke has got a problem he should be speaking about the official and not trying to get one of my players banned.” –06/02/19 Steven Gerrard

This trail of respect turning to ignominy all stems from Clarke clearly hitting below the belt and trying to get Jermain Defoe suspended.

We all know one of the ugliest sights in football is players waving invisible yellow cards at the ref trying to penalise an opponent.

This is the exact same – and Clarke quite frankly should be absolutely ashamed of himself for trying to get a fellow professional punished in order to benefit himself.