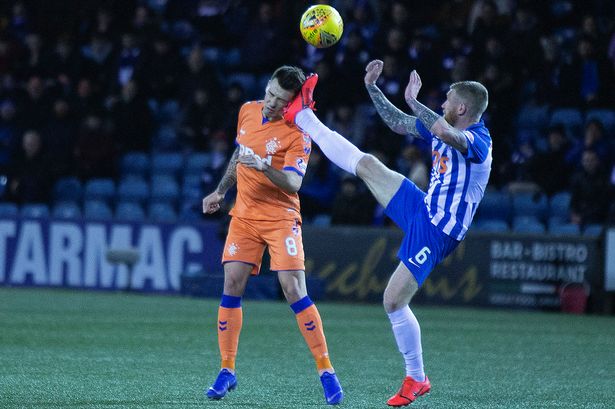 Steven Gerrard and Scott Arfield have expressed a dramatic difference of opinion over Kilmarnock midfielder Alan Power’s ‘challenge’ on Ryan Jack, after the Rangers engine room man defended the tackle while his manager implied he expects disciplinary action upon it.

Speaking about the extraordinarily dangerous tackle, Arfield suggested it was an honest attempt at a challenge, saying:

“I think he goes for the ball to be fair to him. I think he catches Jacko and gets a yellow card. I don’t think he tries to take Jacko’s face off. It’s just an incident where Jacko is brave and puts his head there for the club and the team.”

However, Gerrard differed a tad saying:

It’s certainly a colourful contrary pair of views, but we can’t help being reminded of Liverpool striker Sadio Mane’s infamous high boot on Ederson which earned him a red for Liverpool v Man City in 2017 – that decision caused fierce debate with some saying it was too harsh and others saying it was justified.

For what it is worth, Ibrox Noise are pretty clear on it – as far as we know, the rules say that a reckless tackle without intent, or intent alone to endanger an opponent are enough to justify a red card. In other words, if you went in honestly, but recklessly, and badly hurt your opponent, or you intended to hurt them whether you succeeded or not, both qualify as a red card.

And Power’s was most definitely the former and possibly the latter.

Either way, we highly doubt anything will come of it because, well, it’s not a Rangers player is it?