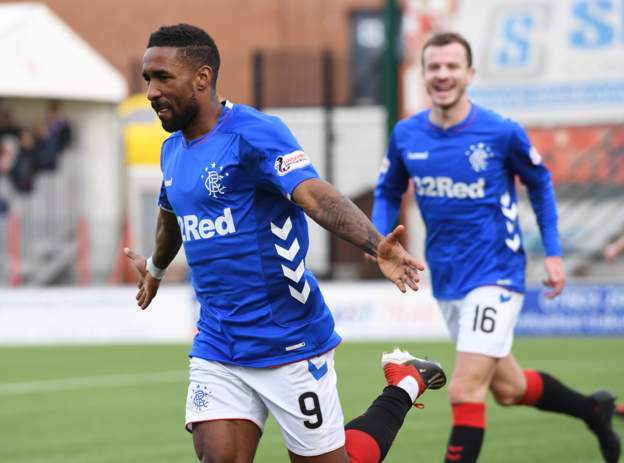 Another clean sheet for a Rangers team and another five goals racked up with ease, and with no red card for the opponent this time, Ibrox Noise takes you through our ratings for the best of the bunch at whatever the hell New Douglas Park is called these days:

Called into action once, and did as well as we’d expect McGregor to do. A really quiet day for him otherwise and can be happy his one big save earned a clean sheet. 7

Bombed up and down the right as always, and frankly wasn’t needed much at all in defence. A good solid day of interplay with Candeias and while some of his crossing was off, a few hit their mark. Took his penalty perfectly. Solid. 7

Had barely a thing to do quite honestly, and found himself in Hamilton’s half a lot. Can’t really legitimately score a defender who had this quiet a match but he did fine. 6

Much the same as Goldson, didn’t really get called into a lot of action. What he did, like Goldson, seemed fairly efficient and quiet. 6

Continues to show why he’s determined to become the first pick – wasn’t remarkable but hungrily involved and linked well with Ryan Kent in the first half especially. Gives his all and never lets his side down. 7

Played a kind of sweeper role and if he was supposed to be marking Tony Andreu, well, his man gave him the slip two or three times. Can’t help feeling McCrorie just offers more, but aside the odd loss of concentration Kamara did ok. 6

Is absolutely thriving in his new central midfield position – still helps out in defence, but who knew he could help in attack too? A few neat forward passes and took his goal superbly, Ryan Jack is becoming one of the best midfielders in the SPL – we want to say ‘the’ best but there is heavy competition for the role. He was, simply, outstanding today. 9

We’ve always known Rangers’ midfield functions best with Arfield in it, even if the man himself isn’t having the best day – but while not stellar today he was very good and his goal was superb. Quietly influential in midfield, marshalling those around him. Good show. 8

First half dynamite from Kent as he tore Hamilton a new one – if Celtic couldn’t handle Ryan, what hope did Brian Rice’s men have? Good assist for Jack and while he drifted out second half, it wasn’t that surprising. 8

On a day the two Ryans were having a field day, it would take something brilliant to top that. Danny did exactly that. Some gorgeous deft flicks, tonnes of dangerous crosses and his trademark hard work, this was a great display of the best of the Portuguese. 9

He’s an amusing one. He’s basically invisible throughout the whole match, but comes alive with the ball at his feet in the box. Really poor effort early on, but made up for it with a stunning header and a fine assist. It’s like he does so little in a match and yet what that little is has a big impact! 8

Will be over the moon with his goal, and he did look bright as well – like something to prove. Well, he’s never going to be first choice, but he wants to make it as hard as he can for Gerrard to keep overlooking him. He’ll be happy with his cameo. 7

Bleh. What can we really say about the totally off-form Davis who just cannot get going at all in this team? This isn’t anything like what he should be capable of but it’s just not happening for him right now. 3

No time to make impact. N/A

Picked a strong team for an important trip to Hamilton, and set his team up well. 4-2-3-1 is working nicely, even if some argue it’s 4-3-3 and though Ross McCrorie will feel a little miffed at missing out today, the men who went out there did the job. Well, until the second half when they barely turned up. Gerrard wasn’t happy about that, but overall he picked the right team and tactics and Hamilton had nothing in response. 8