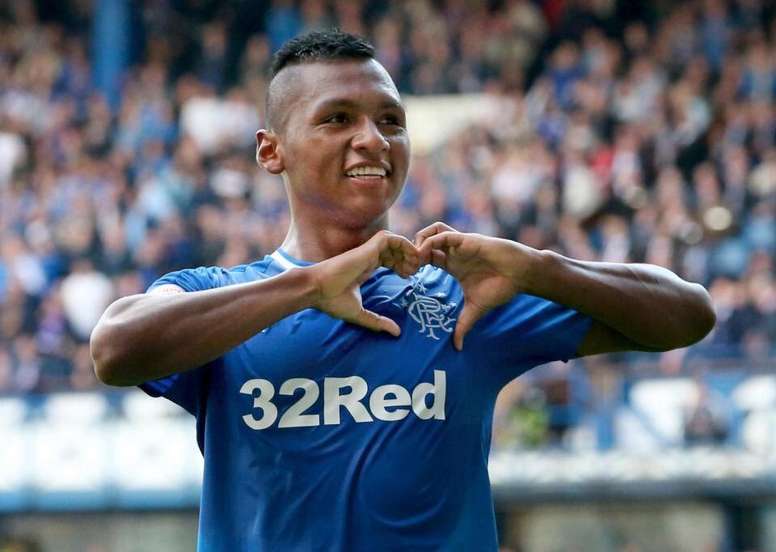 As Rangers gear up to face Kilmarnock in a critical league clash which could go a long way towards defining the top three places, Alfredo Morelos is once again the centre of headlines which all came about as it emerged that Nice manager Patrick Vieira was preparing to bid for the Colombian in order to replace the departing Mario Balotelli.

The initially reported fee was £8M, and it’s safe to say the reaction to this number gives some idea of how far Rangers have come since the days of even the summer when two of our most prized assets, Josh Windass and Declan John, were sold for a combined value of a pathetic £2.3M. If even.

Now with the Ligue 1 giants showing major interest in recruiting Gerrard’s star man, the near universal response to reports of their £8M bid was ‘put a ‘1’ in front of that and we’ll consider it’.

And it’s true – Celtic sold Moussa Dembele for £19M, and while many would argue he’s scored against Rangers and in the Champions League, he’s also never had a call up for France far less claimed a cap and the Rangers he kept scoring against was absolutely howling. We can’t argue against his CL goals, but nevertheless, a striker of that age, who is an international and who’s always the top scorer in Scotland is not worth pennies.

What is Morelos’ real value? Of course it’s an auction – Alfredo Morelos has no value except what any individual team is willing to go to to get him. There’s no such thing as a £50M player or a £10M player – only a buying team’s need to have a particular player.

This allows the seller to hold all the cards over price, especially based on contract and hence Morelos could easily fetch upwards of £15M in this inflated market of high demand – depending on who wants him and how badly.

Rangers’ board knows this – and they are waiting for a concrete bid of at least that before considering the sale. Gerrard also knows this, and has dropped a big hint he expects at least £20M before he’d even think about it.

Morelos has secured Rangers a fat transfer fee for him – it was genuinely decent of the lad to sign till 2022 – something he didn’t have to do given he wishes to move on in time, and he has repaid Rangers’ loyalty to him by agreeing that deal. Sure, he’ll get paid a very handsome amount too, but the reality is he wants to be in the Premier League, and by signing a deal for three years he’s guaranteed Rangers a strong bargaining hand as to price.

Rangers will want close to what Celtic got for their departed player before considering a sale, but absolutely will not want to do it in the haphazard way the Parkhead side ended up doing it.

If Morelos was to go this window, a replacement must be ready. Even Celtic, getting their £20M, didn’t manage to replace Dembele because they didn’t have time.

Rangers will consider that before even considering a huge bid, especially late on this window.