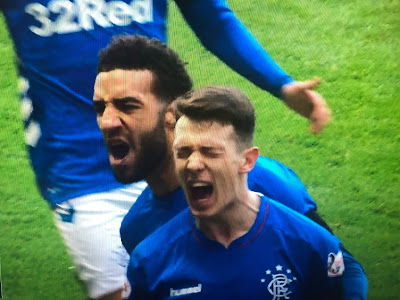 There’s no question today has seen a shift in Scottish football. All the build up in this one was how Celtic would coast to an easy win, despite their form, with only a few sites, such as your Ibrox Noise, discussing how Rangers could win and how history suggested it was in our favour.

90 minutes later and a stunning performance, easily the best Rangers performance since beating Celtic last time at Ibrox in 2012, suggests so much humble pie is being eaten currently and we are extremely unlikely to see too many undercover Celtic fans swarming around the site today.

There are an entire generation of supporters for whom this is a completely new experience – who have never truly, in their adult lives, or in their living memory, experienced Rangers beating Celtic in the league. Or in 90 minutes.

This performance showed the Rangers of old, the Rangers we expect, and despite what certain commentators claim, no, Celtic were not poor – Rangers just absolutely nailed them from the first minute.

Sure, the early signs weren’t promising – three gilt-edge chances came and went and it appeared to be the same old wasteful story.

But, fortune of a slight flick aside, Ryan Jack’s winning goal was just reward for an epic afternoon of colossal performances which showed this Rangers team can rise when it has to, can produce when it must, and can honour the shirt.

This was exactly what older Bears expect of Rangers – not every Old Firm, of course – we can’t win them all – but a composed, angry, powerful, clinical and passionate display with everything left on the pitch.

If Rangers can keep this up, the title can be won.

What a huge afternoon.