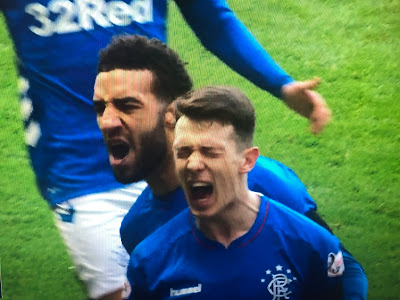 The Aberdeen captain was doing ok with Derek McInnes’ men in second place, and to the best of our knowledge had no major designs on a move out.

His contract was up that summer, and even as recently as April that year he denied any interest in a move – but by that time the rumours had begun.

Fast-forward to his reaction for scoring against Celtic, his reaction to defying Aberdeen at Pittodrie – if ever an adopted Bear’s blood had turned completely blue, it was Jack’s.

We don’t know him to be a boyhood fan – sure, he said he was after he signed, but how many players have made that claim once their signature was in place under the Marble Staircase?

Truth is we don’t care, because whether he was one before or not, the boy embodies everything now that is true Rangers and his absolute pure glee at scoring the (ultimate) winner yesterday is a feeling all us Rangers can identify with.

Maybe not the scoring part, only a select few lucky men (and women) ever get to do that, but the joy of the goal is shared by all, and never was it more meant than Jack’s yesterday.

It’s often said once a Bear always a Bear, and Jason Cummings is another example – but Ryan Jack really has not only got into the spirit of all things Rangers but carries the shirt now as well as any who went before him.

Oh, and he can play a bit too…