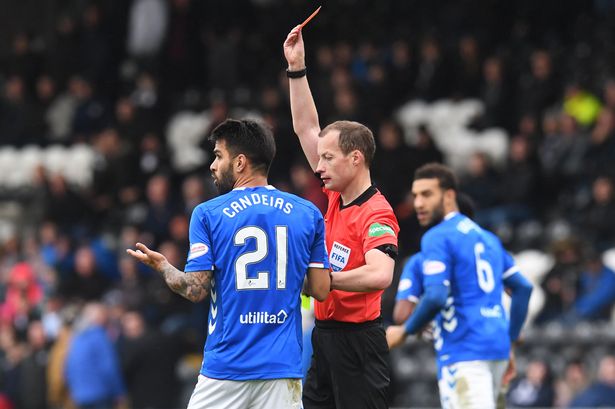 With no right of appeal, the shambles that is Scottish football refereeing has once again cost Rangers following Daniel Candeias’ absurd dismissal for having a polite chat with Craig Samson then getting a headlock and punch in the jaw from Anton Ferdinand.

Candeias’ introduction changed the match, it won the three points for Rangers, and referee Willie Collum’s inexplicable second yellow to the Portuguese now bans him for the visit of Motherwell on Sunday.

Some claim Candeias gestured disrespectfully at St Mirren players, allegedly by blowing kisses among other things, but if this is even remotely true it’s still an absolutely comical reason to give a player a booking, never mind one which leads to a sending off.

We personally think Collum, somehow, got the wrong end of the stick with the ‘confrontation’ with Ferdinand and from his viewing angle may have had 2006 world cup final Zidane in mind – we’re clutching at straws here but the possibility is there.

The point is though whatever the ref’s reason’s for booking and sending him off, Rangers’ lack of ability to appeal is simply a joke.

That the SPFL refuse to introduce a law to allow appeals on second yellows is utterly ridiculous.

Sure, their argument could be the abuse of such a service – that any player can appeal any second yellow and get a temporary reprieve for their next match regardless of the outcome – and that is indeed a valid point.

But it’s not a good enough one – because the flip side of the coin is that completely unjust bookings go unchallenged given the club’s lack of right to reply them.

It reminds us of the classic epigram:

“It’s better to let 10 guilty men go free than jail one innocent one.”

The Candeias yellow card was patently wrong, and this system of non-appeal means Rangers will have to rely on Eros Grezda or playing someone out of position on Sunday. None of this is ideal.

Time to rethink this, SPFL.