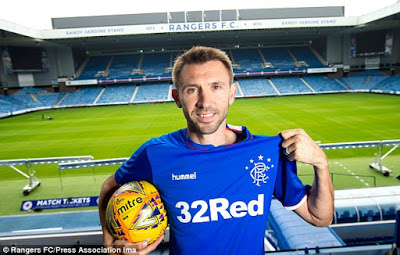 As per usual for Rangers these years, this summer saw a massive exodus out and influx in of players to Govan, with yet another playing personnel overhaul underway.

True, most of the departures were loans, and the only permanent ones were surplus youth and two (disgracefully) cheap sales of John and Windass, but nevertheless turnover was dramatic.

However, with us, astonishingly, fast-approaching Christmas, the season is getting to the half way point (feels like only yesterday we were facing Shkupi) and with 25 matches played, we’ve seen enough of Steven Gerrard’s signings so far to give a little report card.

Let Ibrox Noise take you through the successes and not-so-successes of this summer’s additions.

Which ones do you agree with?

Quite simply the best goalkeeper in the SPL, and his country’s number one, this was a hell of an upgrade from Wes Foderingham and while he’s not quite Manuel Neuer, he is probably as close to world class as any player the SPL has produced. His only two blots are occasional failure to come for crosses and a new amount of needle where he strangely gets physically involved with opponents off the ball. Still, what a signing. 9

For the first month or so we reckoned we had a stopper as good as and in the style of Carlos Cuellar, but that slow start at Killie in the cup then outright bad day at Motherwell showed he was mortal and he has had the odd game now and then since which has been less than imperious. His passing at times looks suspect, but he is still by far our best and most accomplished defender and he’s been a fine addition. 8

When he had the shirt he appeared to be the perfect foil for Goldson. Big, strong, powerful in the air and willing to put in the work and get hurt. A fan-favourite, he was loved by the supporters for his heart as much as anything and he still is the preference. But the stats we revealed may indicate why he lost his place. Struggled horrendously at Hamilton. Still, we do like this lad and would prefer him selected. 8

Has the shirt now and isn’t letting go, Worrall is not a fan-favourite – in fact, only 10% or so of our fanbase can tolerate him, and he didn’t do himself favours with the negative comments in the press of late. But he’s Gerrard’s favourite, so like it or not he’s keeping his place. He doesn’t look convincing but the stats tell another story. We don’t like him, never will, but as long as he doesn’t disgrace us, we’ll accept him as long as Gerrard does. 6

Bit unfair to include him but he is a summer signing, sort of. A free agent acquisition after the window shut, the big Ulster boy is yet to don the shirt far less start. Injury blighted from the word go, he’s only just getting ready now. On the basis of what we’ve had for the wages we’ve spent, you’d have to argue he’s a zero.

No glamour and no flash but solid and gets the job done – except when it’s against Spartak or Killie. Had a terrible match against the latter especially and was taken off at half time. But mostly been reliable. Offers zero going forward but generally decent defensively. But after a bright start has definitely tailed off a bit. 6

Other than a few glimpses of his excellent crossing he’s been utterly terrible. Sorry to be so blunt, but his defending has been mince (out of position and standing off his man defending crosses doesn’t cover it – think Villarreal) and he can’t beat a man. Sure, he’s been out injured for ages, but he didn’t seem to settle before that and was AWOL most matches he was in. That crossing is deadly but he needs to settle before he can even consider himself a valid selection. Croatian international quality but it’s not evident yet. 4

Slow start by the Malian and didn’t look much cop, but as he grew into things he suddenly became the mass destroyer Gerrard claimed he was for about three matches – Aberdeen, Maribor then St Mirren. He was becoming epic. Then he got a thigh injury against the Buddies on 12th August and has been AWOL since (three months, utterly unacceptable) – his return to the pitch has been terrible and he’s now been dropped. We miss Greg Docherty who is much better. Coulibaly can leave. 3

Sumptuously composed and very much a leader, Arfield looked a very shrewd signing by Gerrard and until the international break he was an 8+ every match. But he’s petered out since then, failing to enforce himself the way he did and we do hope he regains that old form soon. A fine player but having a wee dip right now. 7

After a very weak start, Ejaria’s constant presence in the early XIs of Gerrard’s Rangers infuriated supporters, but slowly he started to show his quality. While struggling to produce goals or assists, and not really delivering creative passing, he nevertheless showed great presence of mind on the ball, composure, balance, and good retention in midfield. He is a very technical player who is still developing. He’s grown on us. Just wish he’d smile more! 7

Another slow start, Kent didn’t look like the right player in the right team, but during the famous Rapid and Hearts spell, he peaked. He was remarkable. Since then he’s dipped, understandably, and was sadly back to the earlier Kent by the time we went to St Mirren. Opposition may have got wise to him. Still, he’s got potential and has bundles of energy. 7

Yikes, where do we start with this. An absolute howling shambles of a signing – we brought in a broken player, who passed the medical on astonishingly inexplicable grounds given he was injured, and has sat on the sidelines the entire time apart from a few cameos and one shock start. During all of these appearances ‘horrific’ doesn’t cover how poor he’s been. Sadly, he’s been just as bad for Albania when he’s played for them, and regular fans of their national side have observed he’s not the same player post-injury as he was pre-May. Has cost big money and delivered nothing. 0

We love Kyle as much as any Bear but this signing has been a borderline disaster. While at Hearts he was easily Scotland’s top striker. At Rangers he hardly plays and when he does he has no impact. He has a few goals yes, and against Motherwell looked every inch the Lafferty from Hearts, but despite a couple of goals since then he’s just not had any real say. Sure, Morelos is ahead of him, but he’s been with us for months now and we’re not seeing the Lafferty we know he is. Completely out of favour these days, and with it out of form. We know you can be better Kyle. 5

Ah Umar, what a crazy signing this has been. After failing to get any minutes purely via not being considered suitable for gametime on grounds of application and attitude, he stunned the world by starting the semi v Aberdeen. And let’s be fair to him, he was not bad at all. He held the ball up better than we’d expect, he worked hard enough, and he provided link up play. But that ‘fall’ when scoring would have been more useful blighted him badly. The guy has more talent than he seems, and he is technically better than many players we could name, but as far as the expectation to reality ratio goes, yeah, this has not been a good addition. 2

So, that’s our two pence for you. Feel free to argue your cases in the comments folks!