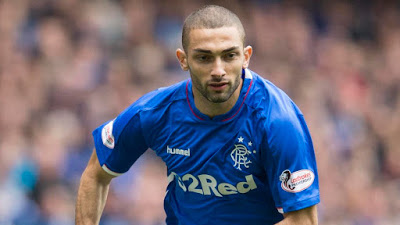 There’s no denying we’ve been critical of a lot at Rangers here at Ibrox Noise recently. From poor performances, apparent poor management to inconsistent results, we’ve not lacked for whining.

But yesterday’s display against Motherwell, while aided admittedly by a correctly-awarded red card, was without doubt one of Rangers’ best five displays of the season, and may even shade the lot.

We’ll go into more aspects of the performance in due course, but while there is a lot to chew through, the impressive display of Eros Grezda certainly posed a huge question to Steven Gerrard:

Does he now have a real third option as striker?

Grezda not only made an assist, but looked lively, more confident, and appeared to be quickly getting over that stage-fright Gary McAllister alluded to earlier in the week.

Oh, and he scored two very nicely-taken goals too.

And therein lies the nub – not only can he score, but he can create. For a winger he doesn’t seem especially quick in the general pace stakes, but over a short burst he is clearly able to make a fist of it and it helped with his first goal especially. And if we add his ability to cross then Grezda, from us writing him off as a January exit, has in one match made ourselves look very silly indeed (not hard, we suppose).

Ok, he wasn’t exactly Brian Laudrup and Ronaldo, and he has a lot of improvement still to make (sometimes appeared slightly clumsy and occasionally lost track of the ball) but with match fitness that will come – and what we saw looked to have a tonne of potential as not only a right winger, but as a striker too.

He’s been known to play there for his country, and while his recent display in that slot for Albania was met with derision, yesterday’s drubbing of Motherwell gave some idea of his eye for goal and ability to support.

We also noted his genuine joy not only at his own goals, but at others’ too – Grezda appears to be a real team player and while he remains a touch rusty, this was a tough Motherwell who gave us a hell of a match last time around on their patch.

They’re a meaty opponent, but Rangers, despite that defensive calamity (more on that later), really never looked anything other than in control of this match.

And Eros Grezda finally got his chance to shine.

And perhaps become a serious bet to play in the 9 now and then.