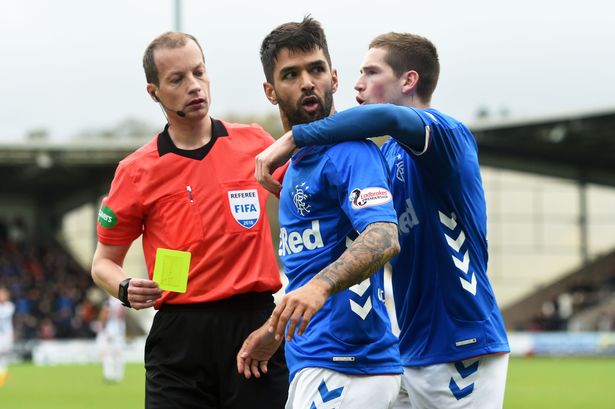 The Willie Collum and Daniel Candeias saga is something we have covered on Ibrox Noise but not to a huge extent – and following Rangers’ appeal midweek (something we were led to believe was not possible) over his second booking, the SFA’s decision to reject the appeal is only the latest sign of the absolute disgrace that is Scottish football and how it is ‘run’.

As Rangers’ official statement, this decision denies an innocent man the right to go to his work, and if ever there was a miscarriage of justice, however trivial that seems, this would be it.

From what we understand, Collum actually had the opportunity to review the incident in his office after the match – a chance to watch it again and check he got the call right.

It is our belief he not only did not endeavour to change his mind, but outright rejected the chance to take a second look.

To label this as ‘officiating’ is unjust at best, and as Rangers said, it ‘defies belief’ how this incident has played out.

Let’s look at the timeline:

Words sometimes fail us at Ibrox Noise at how much further our authorities can continue to sink in the act of incompetence and failure to administrate our game accurately or fairly.

Our best theory is that by upholding Rangers’ appeal, it would have undermined Collum’s decision – but if the referee made a human error with the booking, that is forgivable.

What is not forgivable is sticking stubbornly to your guns, defying sense and borderline changing reality to suit your agenda.

We are not saying Collum is a bad man, or a bad referee – truth is there are worse refs in our game than this guy. But he’s made a big, big error and he’s been extremely unwise to stand by it, and the SFA even worse for backing him on it.

It just undermines refereeing in this country which is already in a pitiful state as it is, and destroys any fragment of lingering trust we still have in both our referees to get it right, and our authorities to govern fairly and rectify mistakes when errors occur.