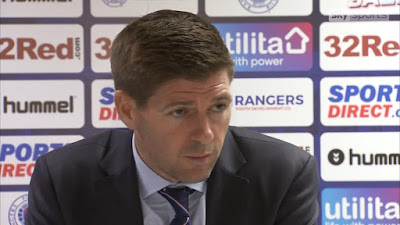 Rangers manager Steven Gerrard today confirmed Scott Arfield’s injury will keep him out of tomorrow’s Europa League group match against Spartak Moscow, and there was no apparent ETA on the Canada midfielder’s return.

The former Burnley man has been a solid and reliable performer in Rangers colours, and one of the better signings from the summer, using his experience to rally the troops around him in the centre of the park, but his recent injury troubles, sustained on international duty, have seen him miss the return of SPL action at Hamilton and it was previous believed would be healed in time for the visit of the Russians.

However, disappointingly Gerrard has confirmed that is not the case:

“Scott Arfield won’t be ready, game’s come too soon for him.”

Rangers were able to get the precious win v Martin Canning’s side without him, but he’s always a miss, and we can only hope he’ll be back in time for Aberdeen at Hampden because big players will be needed for such an occasion and he is one of our biggest.

The question is just how serious his injury actually is, because that’s now three fixtures (including international) he’s been forced to miss.