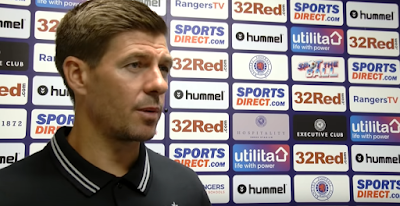 Rangers defender Lee Wallace’s injury nightmare is set to continue after Steven Gerrard today confirmed the former club captain has a grade 1 groin strain and is set to be out for ‘a couple of weeks’.

Following his apparent return to fitness after the controversies which dogged him last season, the ex-Hearts left back looked like he’d become an option again for Gerrard to cover at LB, but the latest confirmation of yet more injuries blues really does make us wonder how long it will be before the 31-year old is truly properly fully available again for Rangers.

“Lee Wallace has picked an injury up in training but he wasn’t in the Livingston squad (and isn’t in the registered UEL squad either). He’s got a grade one groin strain so he’ll be a couple of weeks which is disappointing because he was looking better and better each day so that’ll set him back a short while.”

The former stalwart has had an absolute nightmare over the past season or so. From constant injuries, to serious surgery, to setbacks, to the club controversy and banning, Wallace’s time at Ibrox is becoming something of an ignominious blot on everyone’s copybook, and we really hope he can regain some sense of normality before the end of the month.

But we’re not holding our breath.