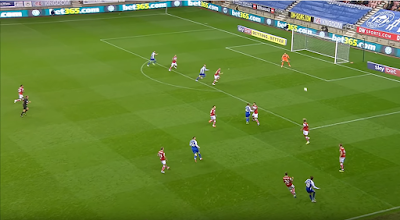 With all the hooha over former Rangers forward Josh Windass’ apparently diabolical displays at the Latics for Wigan, we thought we’d have a little look at the post-Ibrox career of maybe the most divisive player to wear the shirt in Govan for many a year.

If it wasn’t his hot and cold nature on the pitch, it was his social media battles with his own fans. Young Windass ended up being the marmite of the Rangers fan – although few had too many complaints between late January and mid-March when his form was pretty devastating and he scored for fun.

However, that ‘cold’ nature of his time at Ibrox appears to have spread its way south, and Wigan fans are not best happy about what they’re seeing from the ex-Accrington man.

So Ibrox Noise had a little look into this given Wigan supporters reckon Rangers robbed them to the tune of seven figures while we think we should have got much more for the player.

Looking at the recent demolition by Preston, we’re more than a little puzzled to see Wigan in a 4-2-3-1 formation – with Will Grigg as the striker.

Josh Windass left Rangers to play as the 9, to play as the striker, given he believes that’s his best position. And yet at Deepdale (and all other matches, same position against Bristol in which he did actually get the winning assist as you can see in the headline picture) he was on the right of the three behind the man on fire. It was clearly stated by Gerrard and by Windass himself that he sees himself as the goalgetter – so we really wonder why Wigan wanted him, only to do the same to him as Steven Gerrard did by isolating him out on the right.

Wigan supporters are said to be rather displeased with the attacker, and while we can tell his performances overall aren’t good enough, equally he appears to getting hamstrung at the DW in the same way he did ultimately at Ibrox.

Why this article on a player from the past I hear you cry? Because Josh Windass was one of the most controversial players at Ibrox over the course of well over two years, and while Rangers are in a much better place right now, it is always important to look outside yourself too to both analyse potential targets, and see where you went right or wrong with a player who has now left. Especially one with the circus around him like Windass has/had.

End of the day, if Windass left Rangers to become a striker, and manager Paul Cook signed him knowing this, we really do wonder why a second manager in a row is playing him in a position he doesn’t want to be in.