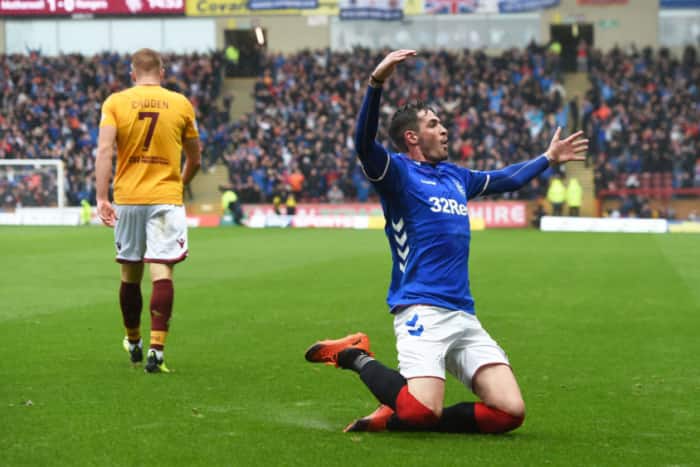 Not his best afternoon. Slipped slightly at the first goal, positioned weakly for the second and his kicking was a little off as well. Looked shaky. He can do better. 6

Good assist for The Bold Kyle and attacked with vigour but horrific defending again blotted his afternoon. His ball watching led to Motherwell’s opener and overall this was the weak Tav that costs goals. 6

An afternoon to truly forget for Goldson. After an early slip cost the opener, his confidence was clearly shot. He struggled on Rugby Park’s surface, and today the slick Motherwell turf appeared a problem for him too. Was not comfortable in a three either. Poor. 4

Stepped up where others struggled, Katic was strong and powerful, and made few errors, but he alone couldn’t stop Motherwell. 7

Rather quiet, Flanagan didn’t appear happy as a centre back and got confused with position on the right of the three. Wasn’t great at all. 5

Defensively quiet but those crosses are venomous. Lethal from the left and he’s easily the best crosser in the SPL from what we’ve seen so far. Worked hard in the middle and front. 7

Worked as hard as he could but missed Scott Arfield’s reliable support in front of him. Did good work defensively as usual but couldn’t quite stamp himself on the match. 7

His performance while not terrible was an indication of why Arfield is a much better option. Will always give everything but he just wasn’t good enough in the middle. 6

Quiet early on but grew into the match, and became very dangerous as it rolled on. His goal was fortuitous but well earned and he might not have been quite as good as Killie but still delivered more than he used to. 7

Outstanding effort, two fine goals and delivered exactly what we expected when we signed him. A better player now than he was when he left, he’s clearly revelling being played in his best position centrally. 8

Wasn’t great – spent a lot of time complaining and looking sour, plus lack of conviction in the box again reared its ugly head for him. 6

Gave better balance in the middle when he arrived, but we really missed him. We’re not too clear on why he was benched. 7

Stevie’s first sign of vulnerability, he made the mistake of going three at the back when we hadn’t tried it properly yet, especially without having that third proper CB, plus curiously dropped Arfield. This affected the balance and momentum quite significantly in this match, and neither defence nor midfield really clicked as a result. His first blip, but he was also let down by horrific defending. 6

Rangers weren’t at their best today, and as we admitted post-UFA, didn’t really deliver in that one either. There are signs of a team that is in process, and is still working on the balance. The start has been so good, but alas the proof is in the SPL pudding and two draws from three won’t hurt the top of the table.

Work to be done!