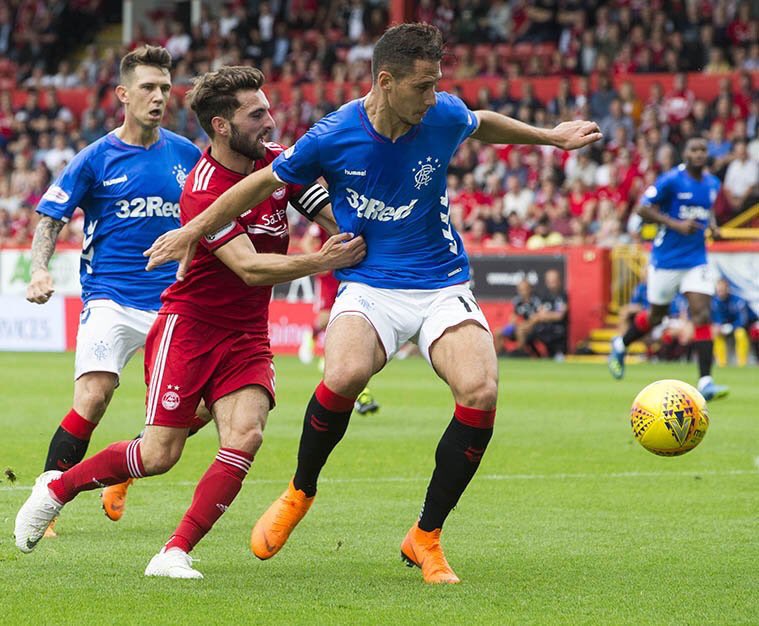 As the dust settles on another incredible 90 minutes in the life of Rangers Football Club, there are no ends of talking points to take away from Pittodrie.

Ibrox Noise will go through the main ones:

1: This was the litmus test for Rangers – after a disastrous opener v Hamilton (2016) and Motherwell last year, the pressure was on to see if Steven Gerrard could begin life in the SPL to any better reward; and while the end result was only a point, it was a daylight robbery of one. Rangers fans can be proud of their team and while there were questions about selection choices at the announcement of the XI, almost every shirt did himself justice and this Rangers team played like a Rangers team for the first time in domestic football since 2011.

2: We’ve been brutal on James Tavernier recently – harassing him on defending constantly. He’s responded to us with a middle finger and his best display as a Rangers player. Positionally spot on, leading by example, this was a tight, disciplined display which shows that when he actually pays attention to his role rather than gallivanting off to attack all the time, he is a genuine asset.

3: The refereeing in this match was… frankly diabolical. Kevin Clancy had a mare reminiscent of the great Iain Brines, and simply ignored the rule book in not sending off Dominic Ball. Rangers had to fight 13 men today – Aberdeen, the crowd and the referee. And came within a couple of minutes of one of the most incredible wins we can remember in the face of it.

4: We still cannot fathom why Josh Windass is being wasted on the right. He put in a decent enough shift, and worked hard for his team, but he’s just not suited to either flank in a 4-3-3. Surely Steven Gerrard can see this?

5: Fans are divided over Alfredo Morelos. Some think he gave the referee a decision, others say it was harsh. We’re kind of on both sides – while there was minimal contact if any, he did kick out and if that is spotted, it’s a red. Yes, worse stuff happened in this match that didn’t get punished, but that’s down to incompetent officiating rather than anything defending Morelos. His attitude and petulance remain an issue, and while he was clearly provoked, he took the bait hook line and sinker. Rangers will likely appeal though and we should still have him for St Mirren. Lose, and we may not have him for Celtic.

6: Defence had its first SPL test and mostly did very, very well. It made a pig’s ear of the goal – James Tavernier was outmuscled and Connor Goldson’s lunge to block was weak – it’s just a shame the one real defensive error in this match led to the only shot Aberdeen had, and it stole a point. We have to take the positives otherwise.

7: Ryan Jack has grown in the past three matches to from his divisive old self to a universally loved player – it’s taken him a long, LONG time to hit rhythm in this shirt, but now he has, and he is finally delivering. SG could clearly see in him what some of us on Ibrox Noise (and in the support) couldn’t and the lad is stepping up. And we’re delighted to witness it.

8: The level of assaults against Rangers players has gone from disgraceful to criminal. From the rubbish on Nathan Oduwa all those years ago, to Cardoso’s broken nose, to Kipre’s season-ending assault on Jack, to yesterday’s latest malevolency, this stuff would see charges if it happened on the street. We accept the SPL is a tough physical league, but Rangers matched this yet still get assaulted? It’s not on.

9: While our fans provided ample support for the players, and did the club well in terms of gusto, their behaviour in throwing coins and litter on the pitch wasn’t acceptable. The banned songs too need cut out. We don’t like criticising the fans at the ground, but this stuff needs canned.

10: The general nastiness in this fixture was probably even more toxic, despite the pre-match calming by Gerrard and the niceties from McInnes earlier in the year. There is a real vicious poison in this fixture we don’t even see in the Old Firm. When fans cheer players in clear distress, there’s a problem.

We missed out a tonne. What ones did you see?