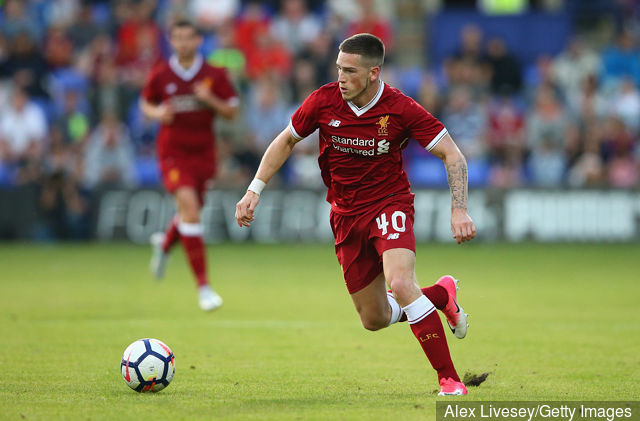 Oldham born 21-year-old Ryan Kent is currently signed to Liverpool
and can play on either wing. He is very highly rated by the Anfield management
team and they are anxious to send him out this season to as good a club as they
can find, to give him the experience of playing at a higher standard level than
their U23’s side.
He is a former England youth international, having
previously represented his nation at U18 and U20 levels.
After many impressive appearances of the
2014–15 campaign playing on the wing for the youth team, his performances were
rewarded when he signed a new long term lucrative contract to keep him at Liverpool until the summer of 2019.
He was named in Liverpool’s 30-man squad for
their tour of Thailand, Australia and Malaysia
for their 2015 pre-season tour. What an
honour for a young 18-year-old youth player to earn!
On 17 July 2015, Ryan made his first-team
debut against Australian side Brisbane Roar and was given a first-team squad
number. Astounding progress for someone so young to break into that standard of
Liverpool squad.
The young Reds winger was making a great
reputation at the club and the Anfield side started to receive numerous offers
to take Kent
on loan after the player had impressed so much in the pre-season tour.
18-year-old Ryan eventually joined Coventry in September
2015 on a youth loan deal for four months until 16 January 2016. He played in
17 games, scored 1 goal and wore the no.40 shirt
for the loan club.
On 5 January 2016, Jürgen Klopp gave him his
first-team competitive debut against Exeter
City in an away FA Cup
match. The game ended 2–2 with young Ryan impressing his German boss.
On 26 July 2016, Kent
signed a 1-year loan deal with Barnsley to
play in the Championship. The deal included a clause requiring him to play in
at least 75% of their games.
This turned out to be no problem at Barnsley
as he featured in 47 of their games, scored 3 goals and had loads of assists,
especially when Ryan went on to win Barnsley’s
prestigious Young Player of the Year award.
Back in Merseyside for pre-season training,
Ryan put in more impressive performances leading to speculation that Kent would probably
be asked to stay with the first-team setup for the 2017-18 season. On 11 August
2017, he signed a new five-year deal to keep him until 2022.
On 31 August 2017, Klopp decided to send Ryan
to Germany on loan to Freiburg on a 1-year-loan-deal for the 2017/18 season.
After six first team appearances the deal was
mutually terminated due to Ryan not getting enough first team game time.
Offers from Barnsley, Derby,
Leeds and Middlesborough came in, but Klopp thought that Bristol City
in the Championship would be best for him. A financial penalty was added to the
4-month-deal that would only apply if he didn’t feature in
enough first team games.
He played in 11 of the Robins games and
managed to notch up several assists during this short period. After failing to impress
the manager Lee Johnson, Kent
was left out of the match day squad for the last six games of the season.
Kent has to show his true
quality this coming season to whatever loan team Klopp chooses. Apart from
Rangers’ interest in bringing Kent
to Ibrox, Leeds, Blackburn and Wigan are other
clubs vying for his services on a 1-year loan.
The Liverpool winger definitely possesses the
pace and trickery to cause most defences a lot of problems and he could still
turn out to be a very smart acquisition for Rangers, but only if he can recapture
the form he produced before he moved to Germany.
The light blues have the added advantage over
the opposing teams for Ryan’s signature with the attraction of having Stevie
Gerrard as his manager. Plus, the added bonus of having the top class
ex-Liverpool coaching staff, who are already in place at Ibrox.
Ibrox Noise has supplied you with all the
facts, do you want to bring him to Rangers?