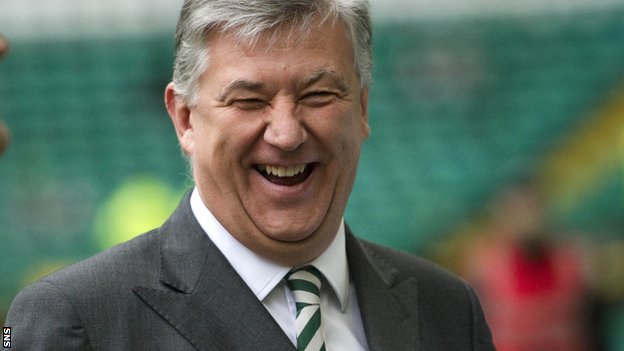 When Celtic were 13 points ahead of Rangers, Aberdeen and Hibernian as the league split into two teams of six, I had a thought. With the league already won, would the champions actually have the balls to calculatedly lose to Hibernian at Easter Road and lie down to a very average Aberdeen side at Celtic Park?

Would they really have the audacity to lose a good home record, into the bargain – just to punish the team they love to detest – the Famous Glasgow Rangers?

Well the answer may be yes – because it really suited them on the last day of the season to see Rangers lose league position money and to deny the light blues making steady progress.

It is a form of cheating not turning up to win a game, but proving that is another matter altogether. Any team that’s involved in any type of match fixing is, in my opinion, a disgrace to their team colours – we are of course not accusing Celtic of this, but the coincidence of two defeats during the split to the two sides directly competing for places with Rangers while at the same time destroying us twice by 4 goals or more cannot be ignored.

It wouldn’t surprise me if some Celtic players’ friends or their fans had money on an Aberdeen win, especially at odds of 11/2.

Sporting integrity? You’re having a laugh! Most of their fans can’t even spell integrity.

Could they do this to their own loyal fans who pay good money to support them every week in all kinds of weather? All this, in the hope that we would finally finish in 4th place and miss out on Europe and other financial benefits? In fact, most Celtic fans are happy the way this all worked out, as they despise everything about Rangers.

I could not imagine Walter Smith showing the same lack of professionalism as he has far too much integrity to accept that same type of situation.

There is no doubt that since the arrival of Brendan Rodgers, Celtic have become a better team, but I have lost the little respect that I had for him. I sincerely hoped that Brendan had a bit of class and was above the usual hatred shown towards us from the east enders, but it appears I was wrong!

We all had an inclination it was possible the shenanigans could go on and actually happen, and guess what – it is absolutely pathetic in this day and age for a team to down tools to the detriment of the opposition!

Of course, everybody is denying it online, but this just fuels the theory that Celtic blatantly lost to Hibs and the Dons on purpose, to punish a poor and disappointing Rangers season.

Back in season 2007-08, Rangers were not allowed by the SPL, to extend the season. The reason? Sporting integrity from Celtic and other teams, made sure that Rangers had to fulfil all their fixtures within the allocated finishing time of the last game of the season. This forced the ‘Gers to play all 8 final games in only 22 days. This was our preparation for a UEFA Cup final in our 0-2 defeat against Zenit St Petersburg held in Manchester.

Plus today we have further nonsense against Rangers with regards the UEFA license, which on top of the stuff from the weekend really makes you wonder how much is ‘playing victim’ and how much people really are out to get us.

The Celtic board in particular, who invented and used ‘Sporting Integrity’ to suit themselves in 2008, should now be pilloried by every fair minded supporter, for the indecent way they tarnished the term last Sunday afternoon.