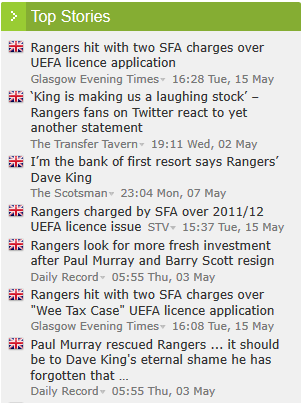 The media and press are getting their final jabs in today before Steven Gerrard takes over at Ibrox, with a sudden deep flurry of negative headlines before the sea-change of Scottish football clicks in.

One look at the headlines above gives you some idea of the last-ditch attempts to kick a club as it gets back up off the floor – the BBC’s Mark Daly has also added a child abuse story to the list as Pacific Quay get in on the act of throwing negatives at Rangers way before it becomes ‘difficult’ to do so with a legend of British football such as Steven Gerrard formally arriving next month.

The trend began last night with a story about Michael O’Halloran and his visit to a Catholic church, with the Scottish press choosing to highlight a minority of idiots and knuckle-draggers who condemned him, and has continued today with SFA this, child abuse that.

There is no coincidence all of this has poured out in the 24 hours following a tonne of good news with regards signings, spending and European football prospects.

But as Ally said all those years ago:

“There are probably one or two people out there enjoying it, maybe one or two people having a wee fly kick. I would suggest to them to give a right good kick just now because we will not be where we are for long.”

A month, in fact.