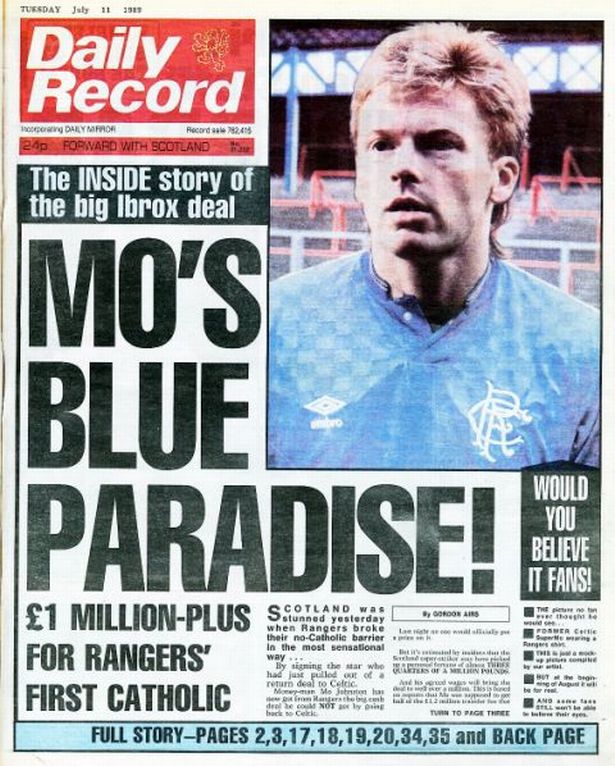 1989 was a pretty significant time in Europe. Outside of Glasgow, the tumbling of the Berlin Wall was the biggest story that year, East and West Germany uniting at last under one flag in a historically colossal act which sent shockwaves throughout the world.

It was still a pretty big story in Glasgow too mind you, just not as big as the one to this goldfish bowl that broke in early July.

Yours truly still remembers that day like the older generation remembers JFK, or most of us remember 911, a day in which the media went absolutely ape over the news and produced a mock up of what MoJo would look like in a Rangers shirt.

I still remember strolling through Ayr staring at the rag unable to believe we were actually signing the guy. From my point of view we were signing a Celtic player, pure and simple – I was of an age where I did not fully grasp sectarianism and bigotry, but I more than got the football division between Govan and Parkhead – we all did.

But to this day that signing sent shockwaves throughout Scotland and remains the biggest, most stunning, most incredible signing either Old Firm team has ever and will ever make.

Losing Johnston to us was where the modern day culture of Celtic trying to nick players we are interested in stemmed from – it has happened many times over, with competition for Nacho Novo, Derek Riorden, Scott Allan etc, but nothing Celtic ever do, not even Allan, will ever beat MoJo.

But of course, Rangers most certainly had signed catholics before, but never a player who had played for Celtic – and while the media focused on the burning of scarves and the alleged hatred from some fans towards our new signing, that ire was more to do with the fact that only a couple of years earlier he was strutting his stuff in the green and white and even proclaimed he would be returning to Celtic from Nantes.

Only for Graeme Souness to step in and pull off the most audacious signature in Scottish football history.

The hype over the transfer often overshadows how good a player he actually was for Rangers – he won over most of his detractors by scoring, and when he bagged the winner against Celtic at Ibrox with a 20-yard daisy cutter, that pretty much sealed the deal.

To this day the MoJo episode haunts Celtic. Rangers violated them that month, that fateful July in 1989, in a way they will never be able to match. Barriers were broken down, and while both Rangers and Celtic had already opened up the doors to any good footballer regardless of where they came from, that signing completely blew away any perception of any nonsense of ‘signing policy’.

It is in many ways a pity we remember more of the gravity and significance of the signing, than the player’s contribution itself, but when a team makes a transfer of the seismic nature of that one, it cannot be helped.

It was the signing that changed Scottish football.