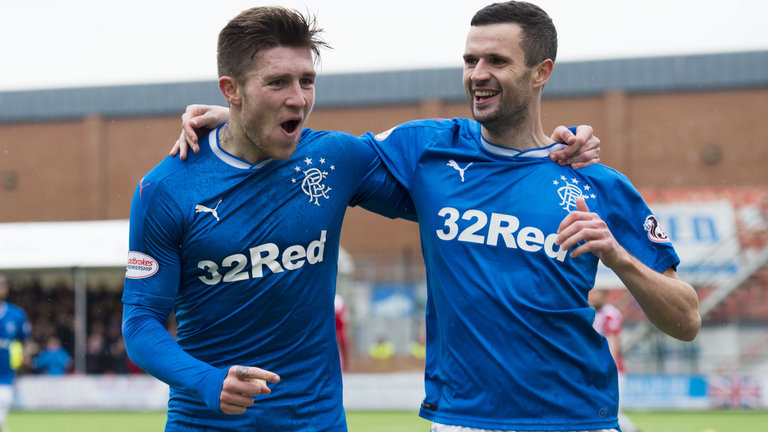 If you listen carefully, very carefully, the shifting of the landscape can just about be heard starting in the distance.

The most obvious sound of such movement and the fear it’s causing is the amount of attacks on Rangers site fans of other teams are said to be making right now. One large forum was outright hacked and taken down, while your very own Ibrox Noise has apparently been sullied by the fans of various teams in green. We say ‘apparently’ because we honestly couldn’t care less what they have to say about us, and indeed thrive on the fact they are spending time obsessing about the Rangers and yer Ibrox Noise.

However, added to a week where a Rangers man was made Scotland manager again and Rangers put five past Hamilton to add to the six we rattled beyond Ayr’s goal and the fact Celtic dropped yet more points at Parkhead has led to something very interesting indeed;

The smallest the gap (in every sense) between Celtic and Rangers has been since 2011 when Steven Naismith’s injury that October derailed a 15 point lead for Ally McCoist’s men and saw Neil Lennon’s side stride past as we fell into admin the following February.

The restoration of Our Rangers has never looked more real than it does right now – we know there’s a long way to go, and there’s plenty of work to do.

But the fact is Celtic have been mince this season, and with a 9 point gap the difference between the two and Rangers pinging the goals in for fun right now, there’s something happening, no?

Celtic might try to make excuses and claim ‘it wiz only Hamultin’ – true, but pretty sure St Johnstone are fourth from bottom too and in horrific form. Was it just a blip them drawing? A blip them losing to Kilmarnock? A blip us taking a point from Parkhead again? A blip Hibs getting a draw?

In fact, who cares! The numbers speak for themselves and with us nearly at the end of February the gap is reducing, not increasing.

Rangers do still have much work to do, and we all know how much. But there are now the first real tangible signs that this Celtic can be caught, that Rangers are going in the right direction.

It’s been a long time since it felt like Rangers could crush the diddy teams in the SPL and elsewhere in Scottish football. That’s 11 goals in two matches, and this time it ain’t v Albion Rovers and Airdrie. This was on the patch of a side who beat Rangers at Ibrox.

Most pleasing of all was Graeme Murty’s post-match disgust at the loss of goals. The defence is not completely delivering right now, and both full backs are being caught out of position frequently, not to mention the increasingly hapless Wes Foderingham.

But the fact we delivered 5 at the other end is a sure sign of something clicking.

We’ve a long way to go, but we are clearly going in the right direction.