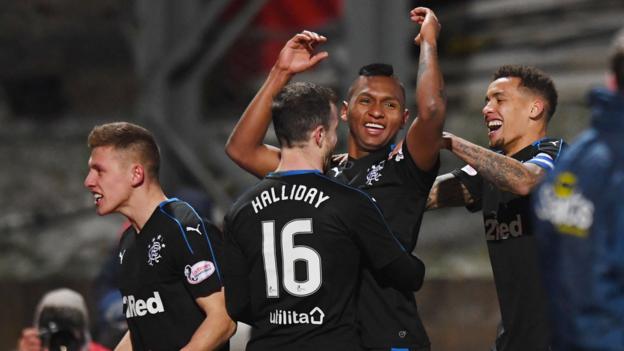 They say you learn more in defeat than you do in victory, and as much as that remains true, there were certainly things for Rangers fans and Graeme Murty to chew on following last night’s effortless dispatch of St Johnstone. Ibrox Noise takes you through a few of them.

1: Remember the old days where we used to criticise the likes of Raith Rovers and Hamilton for carrying out hatchet jobs on our players? Well, last night’s repeated assaults from St Johnstone was an unexpected tactic from a normally respectful Tommy Wright side who usually give everything but stay within the law. From Murphy’s suspected broken toe from Matty Willock, to Murray Davidson clearly deserving a red for a kick at David Bates, the Perthshire men were out of line and amazing escaped any sendings off. We suppose it’s a compliment, that such teams cannot beat us fair and square so resort to violence, but it may have cost us a key player for the Old Firm.

2: Rangers just have to persuade Les Ferdinand to change his mind about Sean Goss. Graeme Murty is keen to retain the QPR man, and it’s no wonder. The playmaker has been stellar and some of his passing range last night was scintillating. More and more he’s reminding us of Barry Ferguson, when only a month ago such a comparison was just ridiculous.

3: David Bates is having a very shaky spell right now, and following his bright earlier period, is starting to unwind. He’s not even that a young a defender, so we cannot pin youth on the 21-year old, he just looks unsteady, unconvincing, and we are starting to wonder if he’s really good enough for a club the size of Rangers.

4: Rangers amazingly did not really miss Declan John too much, and Andy Halliday really did himself proud with a cameo display deputising for the injured left back. This is not to say we can cope without John, because he’s the best LB we have, and his marauding runs on the left were noticeably missing, but Halliday proved he can fill in and do a job when need be. The exact definition of a squad player.

5: Russell Martin isn’t good enough. There, I said it. We’ve been toing and froing over the on loan Norwich centre half, but for the guy to get easily beaten in the air twice kind of shows why Norwich let him go. He is doing a lousy job in defence, quite honestly, and if he ever had any significant ability at the back, it’s well and truly gone now. He and Bates is by far Rangers’ biggest weakness.

6: Bruno Alves’ return is timely. Rangers’ central defence is pretty unconvincing at best, and while Alves has his faults, one thing he isn’t is weak in the air, and the back two are struggling to clear their lines. He has many critics in our support, but we’d play Alves again. He’s got an international boss to convince, and he’ll run through brick walls for us to prove to Fernando Santos he’s ready for Russia.

7: Wes Foderingham is Jekyll and Hyde. For every fine save (he made a couple of notable stops last night) there’s an ugly flap at a cross ball, or messy spill. Is he good enough? We said in a previous entry how he was not, and we stand by that – think of the praise guys like Goss and Docherty are getting. These are unquestionably good enough. That Foderingham has so many doubters shows why there’s a debate happening.

So what else did you fine gents and ladies pick up that we might have missed?