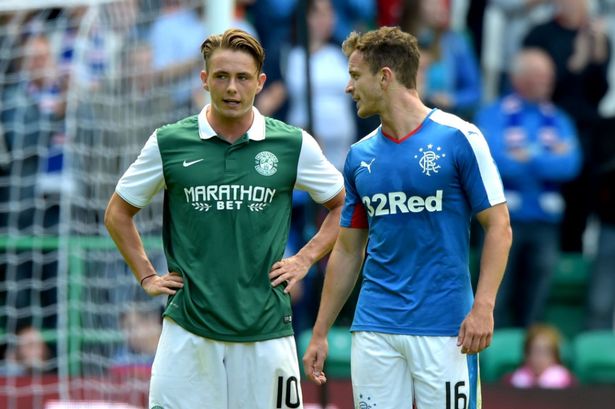 We held off from this piece for quite a few reasons, but it seems like it could be one that runs for some time, so we have elected to go with it.

It might be a couple of matches ago, but Rangers fans cannot have failed to notice that until he faded, Scott Allan was once again our tormentor at Ibrox. Be it for Hibernian, Dundee or anyone else, whenever Rangers play a team with Allan in it, we struggle against him.

The worrying notion is that while there were mitigating circumstances years ago for Kenny MacDowall’s tragic Rangers to get destroyed by him at Easter Road, we are seasons on from that yet still incapable of dealing with him.

Allan is a class player, who, like his ex-team mate Jason Cummings made a bad move (Celtic, Forest) at the wrong time in his career and struggled, but when in the mood and on his/their game, is capable of pretty colossal things.

Some readers are probably wondering why on earth we are still talking about him. Well, there is a nagging feeling that one day Scott Allan will still be a Rangers player. He is a childhood bluenose and while many fans would argue he has made a bed and can sleep in it, players Rangers have ended up with have done far worse to us before they did. Think of Ian Black.

Allan has stood out head and shoulders above anyone else in midfield every time we have faced either a Dundee or Hibs with him in it. He is the kind of midfielder we could still use – a lockpick with vision, skill, and strength and still of a young age.

He looked, sadly, infinitely better than both Jason Holt and Sean Goss (the latter still impressed) against Hibs that day, and our midfield simply could not cope with their threat.

There was no coincidence his introduction by Neil McCann late on at Dens sealed all three points for the home side, and every time Rangers play against a team with him in it he is a complete pest.

Celtic already admitted they do not need him – ex manager Deila confirmed they literally signed him to annoy Rangers. To stop Rangers getting him. One can see them terminating his deal before overly long.

The question really is is it too late for Scott Allan? He is a bluenose, albeit a pariah, and he has the ability Rangers could still find handy. He would not be the first Bear to go to Celtic and eventually come back home and find eventual acceptance and forgiveness.

Many may say that ship has sailed, but never say never in football.