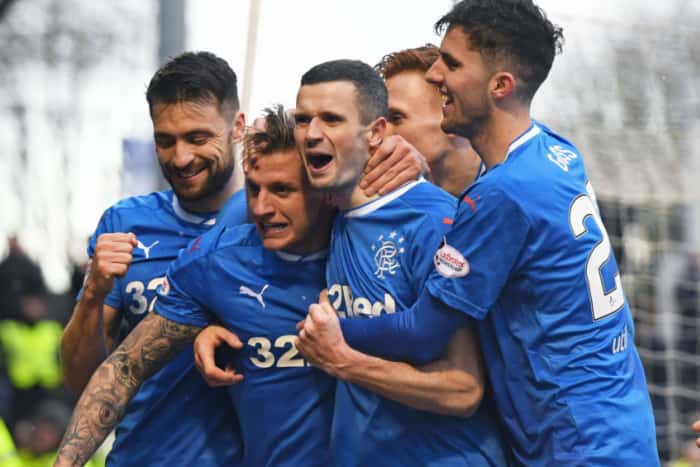 Regular readers of Ibrox Noise will be well aware we have advocated a change in formation from the 4-2-3-1 for some time now. While in itself decent enough, the formation does not get as much out the players as we would hope and has certainly been ineffective against the likes of Hibs, while isolating Jason Cummings.

As such we at the site wanted to revert to a 4 in the middle and a partnership up front, certainly given we do not lack the players to achieve it.

It is as if manager Graeme Murty listened, kind of. Today’s formation at Somerset Park was quite clearly a 4-4-2, albeit it was a diamond midfield rather than a bank of four, in order to accommodate Josh Windass at the apex.

Love or hate him, Windass scores and scores a lot, so whether his detractors like it or not, he is currently completely undroppable.

However, when we saw the formation confirmed, it was the first time in an age we were genuinely excited to see Rangers play. For as long as we can remember, we have dreaded seeing how the latest ill-fitting setup would confuse the team, but today we saw effectively the best XI we currently have in the best formation.

Our joy was doused a little when we realised Windass was not on the right  but through the middle and it was a diamond with Jamie Murphy on the left and Greg Docherty on the right, as Sean Goss sat at the rear, and indeed while that first half was certainly entertaining for the neutral, Rangers did not produce the quality of play we had hoped.

The diamond was struggling a touch to get into the game, and credit has to go to United for the high line they played, the high pressing they stuck at and the generally tough game they gave us. But once Jason Cummings scored that stunning second goal, it was a stroll for the light blues.

We would naturally have preferred the flat four, but there is definitely a growing immunity on the part of Windass, and Murty will always attempt to accommodate him – but when you look at the 1-6 scoreline, the team, personnel selection and formation are entirely justified.

What a difference playing more to players’ strengths makes. Sure, it was a closer first half than it should have been, but the second half was mostly a stroll and easily the most lethal Rangers have been up front in long enough.

The site’s regular commenter Robbie Wilson suggested pre-match all Rangers needed was good low crossing and this match would be a stroll. Well his wisdom was not far wrong for Jamie Murphy had a stellar match on the left and Greg Docherty was impressive on the right, while both Declan John and James Tavernier had extremely productive afternoons.

In the end 1-6 far from flattered Rangers – we really were that much better. And hopefully we kick on from here.