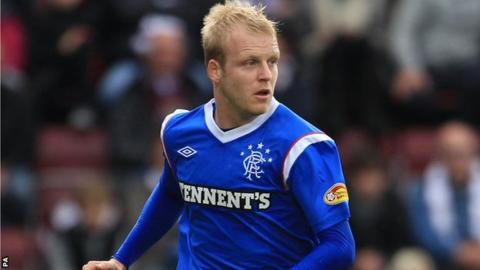 Barely mentioned anywhere as yet is the potentially explosive ‘homecoming’ on Saturday of a certain Steven Naismith esquire.

Of course the 31-year old former Scotland international is currently a doubt for the clash at Ibrox, having recently suffered a hammie, but chances are he’ll make it for the critical clash in Govan, and beyond all the incredible subplots of the match and the ramifications of the result, Naismith’s return to Ibrox has been almost swept to one side.

As we know, Naismith was in light talks to rejoin Rangers on loan in January, when Graeme Murty decided to opt for Jason Cummings instead – and up till fairly recently Naismith was a distinctly toxic concoction who meant only the worst of 2012’s nightmare to most fans.

While that has hardly been laid to rest, the fact many were open to his return in January does suggest a touch of very mild reconciliation has taken place, but with the ex-Everton striker ending up at Hearts, we really do wonder what kind of reception he’ll get, and what kind of performance he’ll deliver, should he play.

There is a part of us who still remembers the ‘Rangerz ur deid’ press conference and how that was unforgivable, but then even more elaborate alumni of this club said the same thing and it has kind of been forgotten in pretty much all their cases.

The other part knows Naismith is a decent guy who made mistakes, and who is a Rangers fan at heart, whose first choice in January was us and who flagrantly begged us to re-sign him. Even his comments once at Hearts did admit they were not his first choice and he’d really only gone there because he’d felt wanted.

Nevertheless, fan reaction will be very interesting should our ex-player take the field. The reaction to both previous Hearts fixtures with Lafferty in the side saw a fairly muted response to the Northern Irish international, but he just does not have the toxicity around him that Naismith has/had.

He will be aching to play in this one, and desperate to show Graeme Murty he was wrong to reject him – we can see the Norwich loanee scoring, in truth. And if we remember, when Lafferty did the same at Murrayfield, he did show us respect by not celebrating even though inside he’d have been exploding having scored such a scorching free kick. We suspect Naismith would be similar.

Nevertheless, it is yet another of the many angles of what is shaping up to be Rangers’ most important match of the season on so many levels.

How do you guys feel about his return?