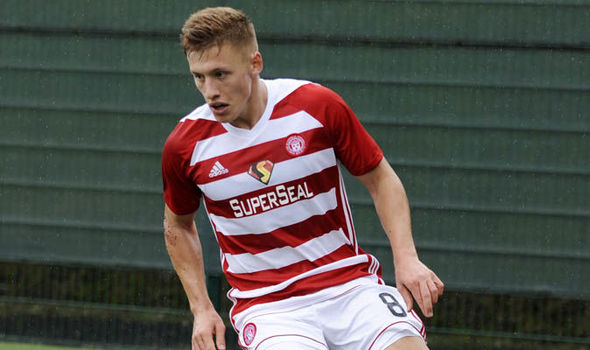 Hot on the tails of the site’s mild criticism earlier of Rangers’ handling of the Steven Naismith saga, Rangers have responded with a move we could not endorse further; officially beginning talks with Hamilton over a possible £600,000 move for star midfielder Greg Docherty.

Make no mistake, Docherty is future Scotland material, the defensive midfielder being an ever present for Martin Canning’s side and the 21-year old already has around 100 appearances for the Accies, which at that age and that position gives some idea of the quality Rangers would be getting.

While Neil Warnock’s Cardiff are also interested in acquiring his signature, his reported preference is Rangers, and clearly the admiration is mutual, with Ibrox chiefs officially opening talks with Accies regarding their player.

As Ibrox Noise brought you a few days ago, Canning has already planned for life without the anchor, by replacing him with Greek engine room man Chrysovalantis Kozoronis, a move which itself gave Rangers the green light to begin negotiations.

This one should happen, as long as Rangers do not dilly dally around over price. The lad is worth the £600,000 and Rangers can and should meet it.

On top of Jamie Murphy and the promising Sean Goss, suddenly this transfer window is starting to look like the right direction.

And we are pleased to see it.