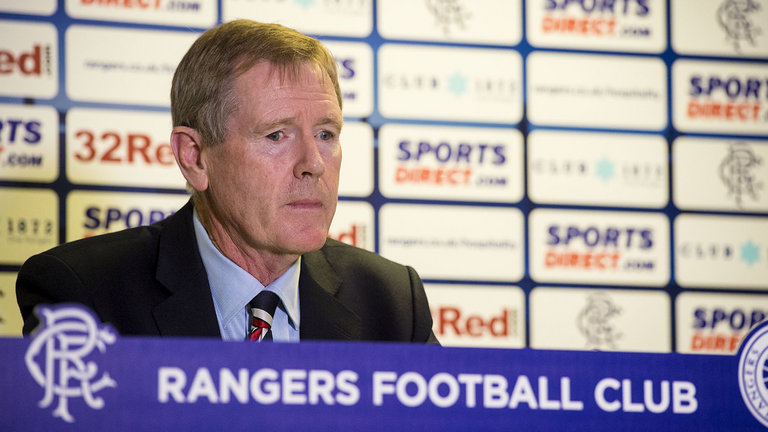 Rangers fans are deeply worried. Ibrox Noise took a few days off over Christmas just prior to the Killie debacle, and the contrived optimism from a few fans before kick off has been replaced with us returning to pure misery. The comments we have received are depressing but accurate.

The fact is once again Rangers’ board has made a farcical managerial appointment, its third in a row, and clearly is not fit for purpose.

We feel sorry for Graeme Murty – during the promotional shoot, while flanked by messyrs Robertson and Allen, his facial expression looked as forced as his decision. A frozen smile of ‘help’.

He did not look like a man truly comfortable in the skin of being Rangers manager and against Kilmarnock it showed.

It says something for the incompetence of our board that Kilmarnock have a better manager than us – that we could not even entice him never mind Derek McInnes.

That we have had to resort to promoting someone out from his comfort zone into a disgraceful farce of a position, and have the absolute gall to plug it as the correct decision.

The goodwill for the board from ousting the previous incumbents has been well and truly exhausted. This site has been against Dave King and his cohorts from the outset – they did, after all, try to buy Rangers with our own money as The Blue Knights, if you recall – and wanted our ST money in their bank account. They were never the right men for us, but they were greeted with lavish fanfare by supporters who truly believed in their credentials.

Gilligan got out with his reputation intact and we do not blame him.

And the court case stuff with King is beyond ridiculous. We will not even go there.

But on the pitch is what truly counts and other than 10 weeks of decent football in the Championship under Mark Warburton (Hibs at Easter Road to the loss to St Johnstone in September that year), this era in Rangers’ history has to count as the worst.

Murty has an impossible task. Forced by his bosses to be the manager because no one else wants the job, or is within our price range, Rangers are teetering on a horrible chasm right now.

For Killie to outclass us and deserve a win spells it out. For Murty to get the job after being humped by St Johnstone spells it out.

Right now it is the wrong everything.