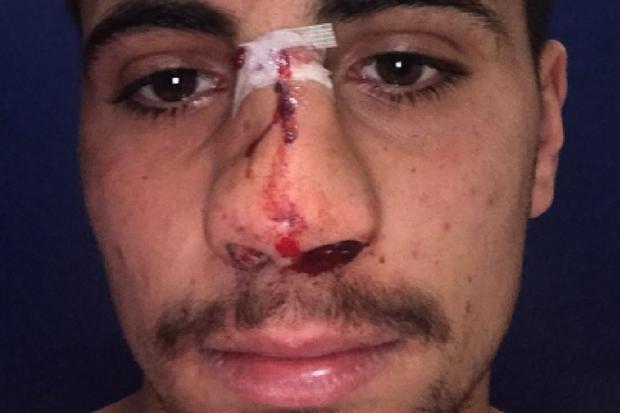 Rangers won last night with another pretty turgid display, an omen of the dross we are likely to be watching for the foreseeable future. In truth, we have been used to it ever since Warburton’s flashy tiki-tika was found out by Dumbarton in 2015 (yes, Dumbarton – three days later we got gubbed by St Johnstone), and this team has struggled to play good football or indeed win consistently ever since then.

But we would like to focus on something else, and you are all free to call us whiners if you like, but there does seem to be one rule for Rangers and one for everyone else.

In short, have Motherwell gone a little too far in being ‘physical’?

We know this league is tough, but in two fixtures in a row against them we have seen one elbow take out Cardoso with lashings of the red stuff pouring down him, while last night Herrera was not far behind when he too found his nostrils leaking viscerally.

Then we had Ryan Jack carted off to medical facilities after another heavy ‘challenge’ which saw a 6-minute time out.

There is a line, guys, and while we are all for strong, physical play, it seems to us that Motherwell’s aggression has crossed it once too many times.

When they are making our players injured or bleeding this regularly, you have to take some kind of notice.

The protection Rangers get seems infinitely less than other teams – it is certainly true our players just are not as strong as other teams. The transfer policy of recent years has brought in lightweight players, guys just not robust enough for this league.

But there is no excuse for an elbow across the face which breaks your nose, or a clear attempt at literally ‘kicking your head in’ as we saw last night.

On the streets the police would arrest for this stuff – it is an old cliché to make such a point – ‘that would get you in jail on the streets’. Well clichés are there because they are accurate.

Kick someone in the face like that in front of the police and you will be up for assault. But on the pitch it is ok?

Steve Robinson’s policy leaves a lot to be desired – Rangers do not want preferential treatment, but we do expect a fair playing field.

And right now some players and some teams are crossing the line into violence.

And that is not the way the game should be played.