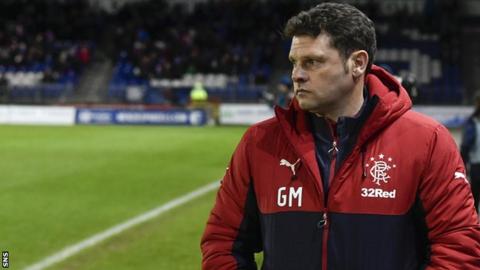 There is no doubting yesterday afternoon’s horror show was one of the most important performances and results in Rangers’ recent history.

With many Rangers fans, yours truly included, allowing ourselves to be deluded by recent positive results, the circumstances which mitigated every result had been completely overlooked.

This is not to smear Graeme Murty – while he has not been absolutely perfect, by and large he has done a stunning job he was never trained for, and held himself with dignity, class and generally carries an impressive job of holding Rangers together.

He has pretty much been the face of the club for the past two months, with the only board representation being an underwhelming AGM followed by the obligatory Dave King post-AGM RTV interview.

Murty has taken everything and carried us, far more than he ever should have needed to.

But a Rangers manager he is not, and the wins we have managed to accrue under him have been despite our squad and because of the circumstances of each match..

Take Hearts – we were impressed by a good win at Murrayfield. Unfortunately Killie went there and pumped them similarly. Killie (!)

Then it was Partick. The bottom team in the SPL and even then our performance was far from impressive.

Then came Hamilton – a match in which ‘we played well’ but failed to take our chances. They were bottom four. And won.

Then Dundee. Bottom team. They beat us.

This is where it all started to get delusional – after unsettling Derek McInnes who had principally decided to take over at Ibrox, we gubbed his lot twice. Odd then that since he made the call to remain, they have a 100% win record. Including absolutely houfing Hibs with ease.

So, then we had the County win. Another bottom team. We played disgracefully and somehow scraped a win.

Then came Hibs, which was quite probably the worst we have played in months. They destroyed us. Somehow Murty’s second half defensive switch did the trick and we won a completely undeserved three points.

At this point we are truly willing to believe Murty is onto something. We are willingly deluding ourselves. Some of us anyway.

Then yesterday came and brought us back to earth with possibly the most horrific display seen at Ibrox in years. This was actually worse than any of the dross from the lower divisions – the fans had seen enough at 70 minutes and rightly left. It woke us up.

Rangers fans have suffered this ever since admin. Ever since February 2012. That is approaching six years.

Teams are not afraid of Rangers and have not been for years. Where five years ago a win against Rangers was still a big thing, even in the lower leagues, now it is becoming a regular thing and quite predictable.

Rangers have truly become something ugly. A board which is incapable of doing anything right (wait till after the AGM, they said, wait till the share issues, they said), a management team which is honourable but out its depth, and not a single player worthy of the shirt.

Some of them should be – Dorrans, Alves, maybe Jack – but none of these guys have delivered.

The new Rangers fan mentality is to justify average players, big them up to being better than they are, and try to persuade ourselves that James Tavernier is as good as Alan Hutton, or that Declan John is Arthur Numan.

It is light years from what it should be, and one wonders if we will see a Rangers at the level we expect within a decade. Or even two.

You may scoff at that, but we have already had six years and we still suck. Spare a thought for Leeds United who, 16 years on from their collapse, are STILL nowhere near the force they were in the 90s.

This is a dreadfully sad state of affairs and we have all aged half a decade waiting for hope.

We will follow on, but I think I have given up expecting the Rangers I know to appear any time before 2030 (sounds terrifying but that is only 13 years from now).