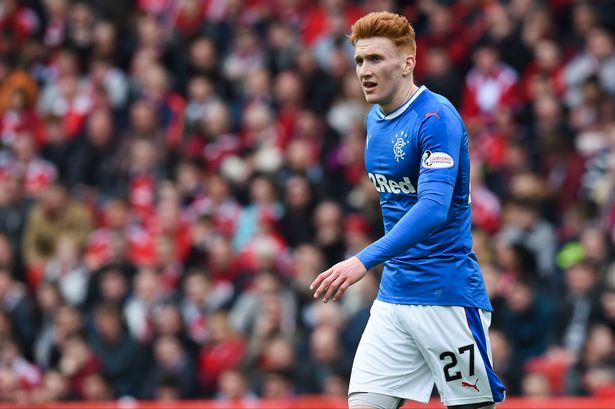 David Bates came in after months of not playing and did so well replacing Alves at short notice that he picked up the champagne as man of the match playing centre back throughout the game. Well done young Bates!

Murty gave McInnes a double bloody nose with two fabulous wins in a row winning both matches in a week with excellent attacking play and decent defending by our players. Now that we have caught up and overtaken Aberdeen, let’s keep it that way by winning three in a row for the first time in a long time.

I took some criticism by suggesting trying young David Bates in the holding role playing beside McCrorie, but to be honest, I didn’t think it was a daft idea, especially the way he played yesterday. Sometimes you have to think out of the box to gain success. Holt has loads of energy, but let’s face facts, he cannot tackle a fish supper and his passing is never accurate enough for me.

I thought the effort was excellent, but the passing at times was pitiful. Every man stuck to his job and did it to the best of their ability. Ryan Jack would have been Rangers’ man of the match if he hadn’t been red carded for an unlucky but honest tackle that injured May and forced him to go off after some treatment.

It was a hugely important six pointer game for us that was exciting, littered with niggly bookings and full of poor passing by both sides. Aberdeen are a very ordinary team who are clearly nowhere near good enough to challenge Celtic for the title.

Wes Foderingham should have saved Aberdeen’s very well taken free kick to bring the game back to a dangerous situation at 1 – 2, as he got a full hand to the ball but didn’t push it away. I still say he is too small to be a Rangers goalkeeper at 6’ 1” – not in this day of age – when all good sides have a very tall keeper.

Furthermore, Manchester United, Arsenal and Chelsea plus other big English Premiership teams play with three at the back and they are head and shoulders above us. I keep harping on that we are not good enough defenders to only play with two centre backs. We continue to be vulnerable at corners and free kicks because we don’t have enough tall players currently in our team.

Windass scored the eventual match winner and it was his fourth goal in the last six games to fully merit his starting place in the team but Carlos Pena was back to looking awfully slow at Pittodrie. Miller didn’t have his best match, but he works so hard filling spaces and helping the team perform.

Let’s enjoy being in second place and hopefully putting some distance between ourselves and Aberdeen.