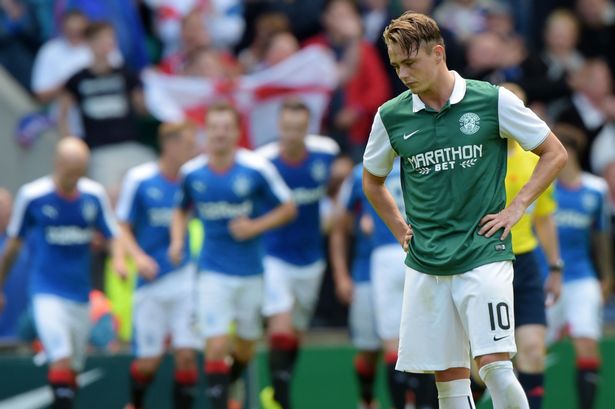 The Scott Allan saga is one which remains a toxic topic, rightly, for the majority of Rangers fans.

A boyhood Rangers fan who betrayed his own and moved to Celtic before his career then fell apart.

Rangers pursued Allan for what felt like an eternity before the-then Hibs midfielder made a very bad career move and bit on Celtic’s offer rather than waiting it out at Easter Road for Rangers.

He was seen as the answer to Rangers’ prayers; a modern Barry Ferguson type who had dominated the Championship and who then-manager Mark Warburton made a priority target.

But after the comical saga where Hibernian ‘refused to sell to a Championship rival’ Allan had a decision to make:

Wait it out in Edinburgh, possibly being frozen out of the first team for a while then sign the pre-contract with Rangers in January, or accept Celtic’s offer and make the switch to Parkhead instead.

So Allan made that heinous mistake, and he went to the East End of Glasgow. His career crumbled and he ended up in Rotherham on loan. Now Dundee.

And last night? His 13 minute cameo changed the match – and for just over 10 minutes Rangers fans were reminded of the player we had lost out on – a small glimpse of what he was truly capable of.

He was booed with every touch, and might just be one of the most disliked players in Scotland never mind at Ibrox. He made this memorable quote recently:

A small part of me genuinely feels for the lad. He made a really, really poor decision motivated by the need to get away from Hibs, and a misguided belief he could make a career at Parkhead.

Why am I talking about Scott Allan? Well, other than the fact he single-handedly outclassed us last night (not hard, admittedly) I feel such a tinge of regret over that whole thing.

Sure, Hibs would not sell, so there was nothing we could do, but if someone could have given him the advice to stay, wait it out, who knows what Scott Allan could be at Ibrox today.

Of course we have more pressing matters than a failed transfer saga over two years old, but hey, variety is the spice of life!