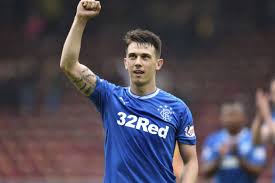 With the actual on-pitch action set to resume at long merciful last, it is worth looking at the likely team interim coach Graeme Murty will field today at Ibrox.

Graham Dorrans remains missing thanks to the ankle injury which has ruled him out of the past few matches, while holding midfielder Jordan Rossiter reportedly remains on the sidelines as well with his continued injury blight.

Fabio Cardoso returns though following that broken nose, and Bruno Alves is entirely fit after struggling through the last international break and being benched for the last fixture.

But we envisage a fairly unchanged team from the side that strolled past Partick Thistle:

As Murty explained, he trusts these players but they must keep performing because at one the biggest clubs in the world there will always be competition and there is someone ‘ready behind you to take your shirt’.

Should Rangers manage another good win today it will cement the growing bandwagon for Murty’s appointment full time.