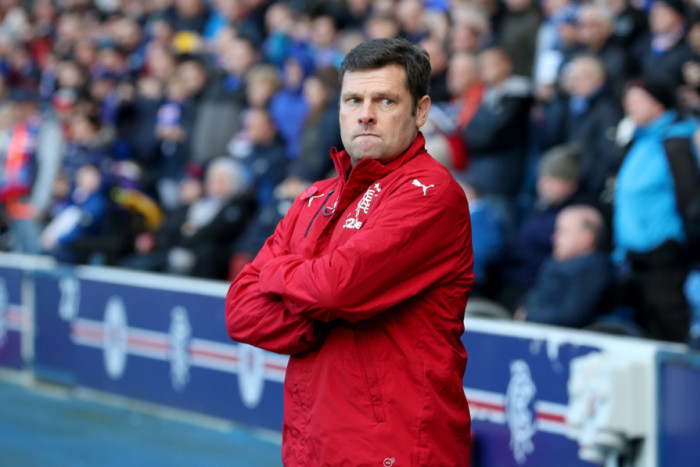 For the first time over the past five or six days, it has started to become evident that Graeme Murty is feeling the pressure of being Rangers boss, and is not the right man to take the club forward to a gnome wood slot or indeed any other situation.

The 43-year old caretaker got a lot of praise and support, especially from Ibrox Noise, and he conducted himself exceptionally, managing to speak well and even get the team playing a bit. Two fine wins against Hearts and Partick respectively got a lot of backing and some fans even bought into him as a sincere candidate for the permanent job.

Unfortunately what has emerged over the past week following the Hamilton debacle has shown that he would struggle long term to take the strain that the job entails, and is absolutely not the right guy to lead the club.

This is not a smear campaign, incidentally, we have respect for Murty and the way he has helped give the team a bit of a rudder during the period where our board fumble in the dark looking for a manager. When we compare Murty’s two periods as caretaker, while not perfect, they far exceed the disgraceful era of Kenny MacDowall which was literally the worst management period in Rangers’ history.

However, we have to be honest, and Murty has now shown signs of stress and the wear and tear of being Rangers manager.

Post-Hamilton he made a dreadful error in singling out Ross McCrorie for criticism. Not only is he the manager who should back his players up, but he is also the youth coach who is the very guy who brought McCrorie through. This was the first clear sign he was the wrong man, for those who might have felt otherwise.

The second was yesterday’s press conference. First off he possibly let slip that he does want to be manager. After being so cagey up till now the mask fell off and without absolutely saying the words, he implied 99% that he does want the role. In short, it is hard to know if his being guarded before was his real stance of neutrality, or if he really wants the gig. It was all garbled and mixed messages.

And then he followed this up with further mixed messages about off-form striker Alfredo Morelos. After stating that it was essential to support Morelos when off form even more than we have when he is on form, he admitted he might drop him tonight.

A post on the site made a very valid comment – was the dropping of Alves Murty’s intent to make his own ‘mark’ on the side? And if he drops Morelos, would that be another?

It is true that we have advocated the same thing, but the way Murty has bigged him up with support implying he needs helped to then say he might drop him is confusing at best.

We reiterate – this is not an attack on Murty. We have time for the man, and we thank him for taking the reins when we needed our ship desperately steadied.

But if anyone felt he could take the job permanently, surely their thoughts have altered.