Home Rangers The Pedro stat that will concern Rangers fans 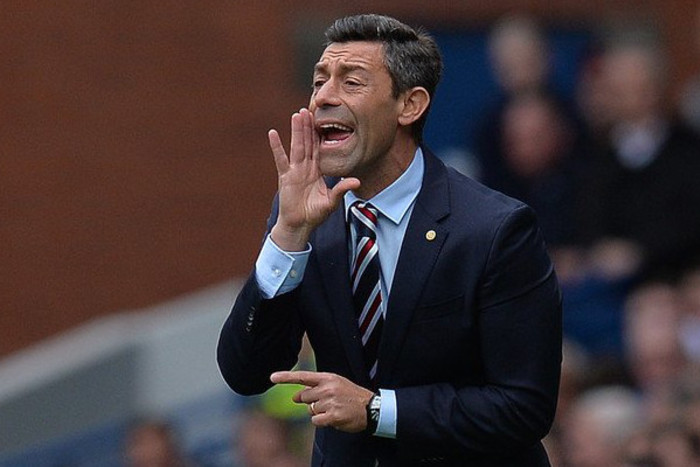 Rangers manager Pedro Caixinha has started to divide Rangers fans down the middle every bit as much as Ally McCoist ended up doing. There is a school of thought where a significant proportion of the support want to give the Portuguese more time, support him, be faithful with him etc. Meanwhile the opposite branch have already decided he is not the man.

Ibrox Noise is in the latter group, and in truth, always has been. We could never understand why Rangers appointed Pedro, with alternatives like Tommy Wright, Derek McInnes and Nigel Pearson on the table. Sure, not quite Diego Simeone but surely more relevant and valid a choice than Pedro.

We do know Pedro’s appointment split the board down the middle. We know it went to a vote and one (unnamed) board member, it appears, had the final say with their decisive vote which secured Caixinha.

And that division in the board has filtered into the support.

But when we look at Pedro’s managerial career, and his results at Ibrox, Rangers fans really should not be in the slightest bit surprised at how 50/50 things have been – 50% has been Pedro’s score from the get go in management.

Actually, we are being a touch generous – Pedro had never managed a 50% win ratio until he joined Rangers.

Let us take a look at the numbers from his entire spell as manager:

Meanwhile, he moved onto a slightly better Portuguese team in the form of Nacional and in his defence, his win ratio shifted up to 42.86%.

It went up further at Santos Laguna in Mexico where much is made of the fact Pedro ‘won titles’. Unfortunately it is not as cut and dried as that. His Santos Laguna did win the overall title in 2015 but the league structure has a strange similarity to the SPL and its split and the league there is split from January onwards. And without confusing you all further, in the three years there, Pedro had a 44.63% win ratio.

Finally we go off to Qatar where Pedro was plucked by the board from midtable obscurity with a stunning 43.59% win ratio at Al-Gharafa.

So, in short, what was it in Pedro’s resume that made half the board convinced he was the right man for Rangers?

If we look at the alternatives; Derek McInnes, following a poor start to his time in management with lowly scores at Bristol and St Johnstone now has a 58.41% win ratio at Aberdeen. Tommy Wright, at modest St Johnstone, manages, in the past four years, a 44.10% win ratio. For a team expected to be bottom six it is not half bad.

This may, to his staunchest fans, sound like a smear campaign and ‘get behind the team ya &*^*&^’ etc. We are. We are very much behind Rangers.

We just cannot see any improvement under Pedro beyond where we are now simply because his entire management career to present date shows no evidence that he is capable of it.

The best football betting strategy here would be that we are likely to remain exactly as we are.

Tomorrow we will travel to McDiarmid Park. Maybe we shall win. Maybe we will not. But this regime is not one we are able to trust on any level.