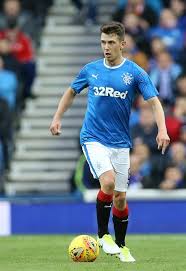 Rangers manager Pedro Caixinha has a bit of a problem on his hands for the trip to McDiarmid Park on the 13th – thus far in every match Rangers have played both pre-season and since the competitive stuff started in earnest in July, one man has been an absolute mainstay of the first team and arguably the first name on the shirt, without missing a single match.

Ryan Jack was Pedro’s highest-priority signing and the first confirmed recruit of the summer window, with the hype around his arrival reaching fever points before it was confirmed, much to the predictable chagrin of both Aberdeen (who now despise him) and the rest of the SPL (who always hate Rangers).

Unfortunately Jack got himself sent off for a second yellow against Hamilton, and with no appeal possible Rangers will have to take the field against Tommy Wright’s men without him in the XI for the first time this competitive season.

Normally we would look to the bench and take the organic replacement in the form of plucky Jordan Rossiter, but the Scouser himself continues to be sidelined for the time being with a knee problem, as confirmed by Pedro on the 18th of last month. To quote the Portuguese, Rossiter is ‘not in our options’.

It is possible the ex-Liverpool man could be fit in 10 days but those chances are extremely remote and the likelihood is Pedro Caixinha will have no available DM for the now-massive clash with fourth-placed Saints.

This is the latest ‘must win’ fixture for Rangers but this one is even more significant as it is arguably against a top-three rival and Rangers have to prove their intentions to at least contend for second by putting away the Perth side.

But who anchors midfield?

Could Pedro be looking at a change in formation for this match to compensate the loss of Jack and Rossiter? With no proper defensive midfielder available the defence will be more vulnerable than normal, and someone is going to have to fill in – does it fall to Graham Dorrans, who as we have complained about, has played far deeper than he should have been thus far.

It may be that it becomes necessary for the ex-Norwich midfielder to fill in there – or could Jason Holt finally earn his start from the cold that has been getting teased for the past few matches?

We must admit there is no obvious solution to this one, and Caixinha really does have a problem on his hands. If ever his managerial skills were to be tested, this is it.

Our personal call would be Holt. It is far from ideal, and he is not a DM, but he did do a good job there beside Jon Toral (remember him) against Hamilton for Pedro’s debut.

But we are glad it is not our decision to make.