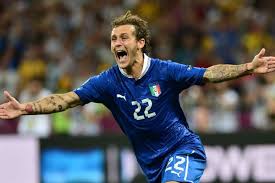 With Kenny Miller looking like a goner at Ibrox (for right or wrong) there is definitely a vacancy for an experienced campaigner in his advanced position to help out the likes of Alfredo Morelos, Josh Windass, Aaron Nemane et al.

In short, Rangers could use a wily fox up front who still has a couple of years left in him, and would be a like for like replacement for Miller.

One such candidate is Italian international free agent Alessandro Diamanti. The 34 year old ex-Fiorentina striker has a very healthy scoring rate for a secondary striker, with a one in five rate in leagues such as Serie A and the English Premier League, and Rangers’ history with Italian players is not half bad when we consider the Porrinis, Gattusos and Negris of this world.

The 5ft 11” forward, who only last season managed an excellent 31 appearances for Palermo in Serie A with five assists for good measure, has been a free agent since August, and is as capable on the wings and advanced midfield as he is behind the front man.

He would be a fairly cost-effective solution for the ‘Miller Problem’ as it seems for sure, whoever’s side we take, Kenny Miller has played his last match at the club and his position requires replacing.

Diamanti has almost 20 caps for Italy and a good reputation in the sport – with plenty experience of the top flight of English football the forward would be more than prepared for the pace of football north of the border, and his extended time back home makes him a robust customer who could handle the ‘toughness’ of the SPL.

We know at Ibrox Noise we do scout players a lot – we get a little bit of stick for doing so. But is there any harm in pointing out available players on low cost who could do a job for us?