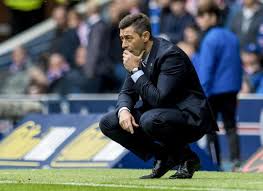 I was wondering how my article about Pedro Caixinha would go down with our faithful Ibrox Noise family (as I like to think of us). I am pleasantly surprised how many of you agreed with almost everything I said about him.

Are you aware that Rangers have won only one league game at home so far this season, a 4-1 win over Dundee. How desperate is that? Losing to Hibernian and Celtic and drawing with Hearts are the other dreadful home results – with I’m afraid – more misery to follow.

Only half of the board wanted Ped the Ted as manager and the other half never wanted him in the first place. They have been exonerated for their opposition to his manic and potentially disastrous appointment. The other half who took the totally unnecessary gamble of risking the future of Rangers, they should be named, shamed and ashamed of themselves for being so stupid.

Should they resign? You bet your life they should! If you are incapable of making sensible decisions on behalf of the club you represent, you don’t deserve to retain your seat on the board.

They didn’t show any common sense with their chance-taking decision. It was not a case of handing over to a solid pair of hands from a tried and tested British style manager. Oh NO! That was too easy a decision to make. Let’s try something different, something out of the ordinary, well you got something very ordinary – a guy who can’t even win three games in a row in an extremely average SPL league.

Is Pedro turning out to be worse than Paul Le Guen and Ally McCoist – YES!

I didn’t judge Pedro for last Saturday’s game as due to so many injuries, we didn’t have the right back up players to cope with them. The sad thing is, this present team are so unfit and lacking in quality, fight and the lack of organisation is obvious.

By not signing Moult, McLean and Walker, it’s showing up already that the squad is far too weak and very light in quality. We’re not even out of September yet and it doesn’t bode well for the rest of the campaign.

The first thing that Pedro should have sorted out was our defence to make us much more difficult to defeat. He obviously thought he had achieved this with experienced Alves and the promising Cardoso, and just like Le Guen, he didn’t fully understand the way our poorer teams play their football.

What Pedro didn’t realise was the rough, tough and far too boisterous SPFL league. Teams like Motherwell, Ross County, Hamilton, Partick Thistle, St Johnstone, Dundee and Kilmarnock are full of lowly paid, get stuck in type of players, because they have no money to buy better players.

Then we have Aberdeen, Hearts and Hibernian who can afford slightly better players than the other 7 teams mentioned, but they can also stick the boot in when required.

Apart from Rangers and Celtic, most of the other sides forwards are usually tougher than our two Portuguese defenders and this is a major part of Rangers problems. Tavernier and Wallace are not good enough defending full backs for the SPFL, so the only way you can still pick them in your 1st eleven, is if you play with a back three and they are the two wing-backs.

This present Rangers team has to score two goals to win a game, because everybody scores at least one goal against us because of our poor defending. We cannot defend cross balls due to Foderingham’s lack of height or confidence. Why don’t they practice corners and free kicks at training every day until they eliminate this particular problem?

Should Alnwick be giving a chance in goals because we concede too many goals? In every game he’s played so far, he has never put a foot wrong and made some great saves. I thought he was outstanding against Partick Thistle and kept us in the game which we finally won 1 -3 after extra time.

I can’t see Rangers winning the next three games on our current form. We might win one or two and that will finish any league challenge that we hoped we had at the start of the season. We need to come second or third this year, and maybe scrape a cup trophy if possible. If we do get into Europe, we must do much better to generate extra finances.

At a club the size of Rangers you must win at least 80% of your games over a season if you want to win the league and Caixinha just isn’t capable of achieving anything like that amount of wins.

I would like to see a new manager appointed before the January window as it is almost over now. Disgraced in Europe and trailing badly in the league and we don’t look capable of beating any team convincibly.

The quickest and cheapest option is to give Graeme Murty a chance to steady the sinking ship, until a fully qualified British style manager can take over (names like Tommy Wright, Derek McInnes, Nigel Pearson and Sam Allardyce have been mentioned). I know it won’t be easy to source the right experienced manager of an extremely high calibre to replace Pedro, but we really don’t have an option. At least Murty will get the team fitter, better organised and add more fight out of the players.

There is no ambiguity here – Caixinha must be sacked – but when? Hearts recognized their mistake with Cathro early on, but took far too long to act upon their decision, and now Rangers have an expensive Ibrox board humiliating mistake on their hands with only one question – when to do the right thing?