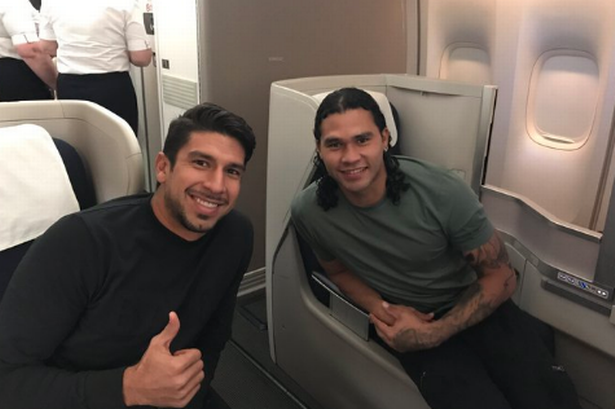 As Rangers fans will know, Pedro Caixinha significantly overhauled the playing staff this summer window, recruiting around a dozen players to completely change the face of the starting XI.

Some have hit the ground running, such as Fabio Cardoso, Bruno Alves, and Graham Dorrans, while some took a bit of time to get up to speed, such as Alfredo Morelos and Ryan Jack.

But there are a couple who remain enigmas, with Rangers fans unsure what they even have on their hands in either case, and who have both only fleetingly appeared in the first team for the odd cameo here and there.

Carlos Pena and Eduardo Herrera, it is safe to say, have not quite settled in the first XI as of yet. Potentially up to £5M was spent on the two combined (depending on what source you read) but as yet Rangers fans will be a little mystified as to the substantial outlay in light of the return so far.

Herrera looked reasonably promising in pre-season, with some energetic running, harrying, and bullying of defenders while creating space. He did not score, nor did he even look like doing so, but his workrate was undeniable.

Come the serious competition though and the Mexican has been a mile off the pace. On the fringes of the first team, he has managed to nab a very fine goal but otherwise has majorly struggled to fit into the system or the game here in Scotland. The high pressing he was so frequent with earlier in the summer completely absent with the real stuff now underway in earnest. He has been very quiet for most of his appearances and has looked a bit lost.

The former Santa Laguna striker has also had to contend with the rise of Alfredo Morelos. His CV looked awesome, and while it took the young striker a few matches to get in the groove, he is now free-scoring and undroppable as things stand.

Kenny Miller is also doing everything (and more) Herrera would, and while some fans like to give the veteran striker stick and moan when he is selected, Miller always gives everything and leads from the front. These are qualities we have not yet seen from the Hispanic but there is still time.

The improvement in Morelos shows everyone settles in a new culture at a different rate. Cardoso fit in immediately, Morelos took about a month. Herrera? Let us hope he does not take too much longer.

Meanwhile the Carlos Pena tale is increasingly odd. He has been given sub appearances but has looked utterly isolated and stood out like a sore thumb for how poorly he has fitted in. There are a range of conspiracy tales as to why the Mexican is struggling, ranging from homesickness to unfitness, and worse have been the stories of his alleged partying antics in Glasgow’s night life. But what they do off the pitch does not matter if they compensate with great football on it, and Pena is struggling in that regard.

We paid a lot of money for him – it is in our best interests he get to grips with Scotland and Rangers and show us the top class box to box midfielder Pedro Caixinha believes he signed.

But thankfully while both of these players have not quite shone yet, the likes of Dorrans and Morelos have.

But four great players are better than two.