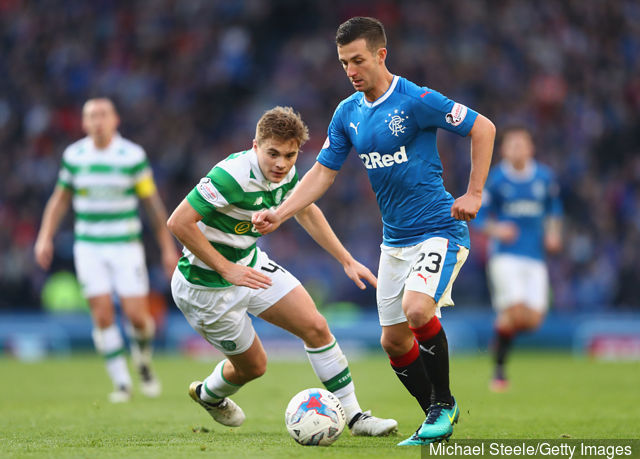 While the current standard of player at Ibrox might not be quite at the illustrious level of yesteryear, Bears like ourselves and, we assume, the vast majority of the support if not all, still hold the values and traditions of the club dear, with an emphasis on dignity, integrity, and professionalism.

And if one player over the past few seasons has lived up to these, it is definitely Jason Holt.

When wee Holty was signed for that comically low fee of £29,000 back in 2015, having been rejected by newly-promoted Hearts, the midfield engine came to Auchenhowie, committed himself to a trial, then aforementioned compensation went to Tynecastle to secure him on a deal.

And while few would pretend he was quite a Barry Ferguson or suchlike, nevertheless the young runner gave everything every time he played and really did coast the Championship at Ibrox – he looked a slick operator, while being a bundle of energy and enthusiasm, whilst chipping in with the odd goal here and there.

He looked a stick-on to cope with the SPL but unfortunately last season it became evident that the anchor had not adjusted to the upgrade too well and struggled to assert himself as convincingly as he had in Scotland’s second tier.

While we are frequently critical of manager Pedro Caixinha, his dropping of Holt is something we had to reluctantly agree with. The lad just was not doing it at this level, and without any doubt, he needed a bit of time away to reassess what was needed.

And if anyone handled that time out with the kind of professionalism, dignity, integrity, and ‘Rangers standard’ we expect, it was Holt – not a word of complaint, not a single negative hint from the lad – he just got on with turning out for the youths and gaining fitness, form, and match sharpness, and approached it with the same level of gusto as he did for the first team.

He might be a Jambo at heart, but he has certainly behaved with the class of a Ranger, and it is with great pleasure we witness the praise he is getting from fans and pundits alike on his slowly-integrating return to the first team over recent matches.

There has been little coincidence that Rangers’ upturn in energy in some recent patches timed with Holt’s introduction as a sub on these occasions, and we really respect the way he has dug in, got on with his job, and given everything to his club whether as a starter, sub, or on the outside looking in.

He has, in our eyes, earned a bit of a chance in the first team again.

We certainly would have no quarrel with him starting ahead of Carlos Pena.