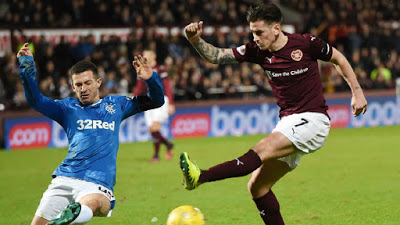 So now that the dust is settling on Deadline Day, the failure to secure Jamie Walker is certainly a significant topic on fans’ lips.

Rangers did not get their man – there is no real quality or reliable holder of the left wing slot, and while Mark Allen secured Aaron Nemane, he is a completely unknown quantity. He could be another Candeias (not that that is illustrious praise but he has been not bad), but equally he could be a Dalcio. Meanwhile Josh Windass and Niko Kranjcar are, in neither case, proper wingers, and both suffer fitness and consistency problems.

Moreover Hearts are left with an extremely unhappy player who now has to wait nine or ten months till he can formally leave Tynecastle, with the assumption he signed a pre-contract in January to switch to Ibrox. Will Rangers even still be interested by then?

Fans are mildly divided on this topic – some do not see what the fuss is about, and if we judge based on his display in Govan, that view has merit. He was poor, on the day – certainly had a tonne on his mind and he was not mentally or physically in the game. They also point to his lack of success at breaking through to the national team – he is hardly a spring chicken now at 24 and Scotland are not exactly blessed with Jim Baxter any more.

But others rate him hugely – regarded as Hearts’ star player, they know he sees his future elsewhere, and Rangers’ drastic lack of a proper and known left winger made getting one in an absolute priority, and the argument in favour of settling up with Levein’s side was Rangers’ need for such a player’s services now.

So now Rangers have just Aaron Nemane (who could well turn out a sensational find) as a proper left winger and we must put all our eggs in the 19-year old’s basket and hope he delivers. Well, I say that – he might be training with the first team but he has been described as ‘one for the future’ by official club channels so whether Pedro actually sees him as someone he would use in the SPL is another matter.

Otherwise it is Josh Windass and Niko Kranjcar in a system which probably does not suit either of the attacking midfielders.

Did Rangers drop the ball on this one? The club’s refusal to spend Hearts’ asking price because the player is out of contract in a year has disappointed some and pleased others. It has pleased some because it showed Rangers would not be held to ransom over a player they can get for free in a year, but it displeased others because of the perceived need for a left winger.

Personally we are disappointed that the position is not really filled, but we are not principally devastated that it is Walker who is not filling it – we do need that slot taken, but we are less interested in who by – just as long as it is a good player.

Rangers dropped the ball by not getting in a genuinely decent left winger – rather than dropping the ball by not getting Walker specifically. The whole summer the club pursued the one player for that position, and failed to get him. That was a risky strategy and one which has not paid off – instead we are left with an untried and untested option who may or may not even be in the first team squad never mind the first XI.

It is not ideal, and it means that whether we like it or not, the Walker saga rumbles on.