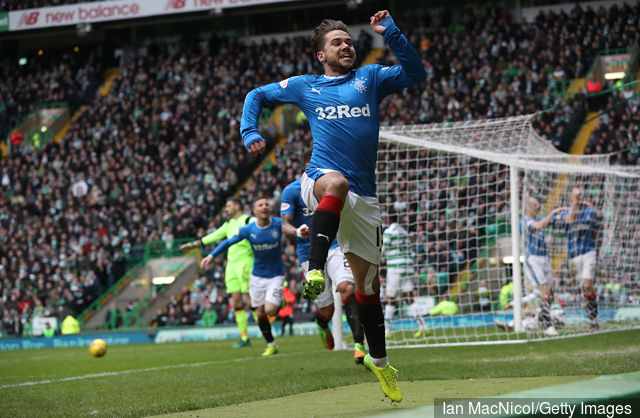 With Harry Forrester set to make his way down the Marble Staircase in the coming days, Ibrox Noise wanted to take our readers through the full exodus we have witnessed this summer, it being the third one fans have had to tolerate since 2012.

We have seen much coming and going through the doors over the years, more turnover than we can probably remember in a lifetime in Govan, and here is the timeline of all of the players gone but not (all) forgotten from Ibrox over the past couple of months, in order, and where they are now.

The first to go, the 38 year old announced through a Sky Sports interview that he was finished at Ibrox, but hoped to continue on in football. Quite honestly Hill was not treated with a great deal of dignity, with an official statement never even being issued. He was a good servant at a time Rangers needed some defensive reliability, and left through the back door. He is currently training at Chesterfield who will not be giving him a deal.

This was a disaster of a signing. We were sure this was a great signing – his CV was immaculate and he was a clear upgrade over Rob Kiernan. Or not. Ok, he was not absolutely awful in matches, those two rookie mistakes at Celtic Park aside, but something stopped either Mark Warburton or Pedro Caixinha being interested at all in him. He too left without a hint of fanfare and was signed yesterday for a cushy gig in the MLS with Houston Dynamo.

One good match this guy gave us at Fir Park – we truly believed he was special – but he faded to nowt after that and was dreadfully absent in all the Old Firm clashes. Quite how he won YPOTY is beyond us. He is back on the coast with Bournemouth.

Fans really did not take to this lad – seemed to have some technical quality but lacked the commitment and attitude. He was not greatly missed when he headed off. He is back at Arsenal and will either go to a Championship team on loan or be sold to one.

Sold to Ipswich for a reported £1.5M, Garner did not suit Rangers in any way shape or form. Certainly did not lack graft but just the wrong guy in the wrong team at the wrong time. Thanks Bread Man. He did get a nice goodbye on the official site though.

He lived the dream and while he is technically out on loan in Azerbaijan, it is safe to say his Rangers career is probably over. He is contracted for another three years but if the manager does not fancy him that is the way it is.

What a waste of a talent. We have discussed it all before and we will not harp on about it. McKay left for his real manager Mark Warburton’s Nottingham and we got £1.5M. Nothing more to say, much like the official statement which was cold as ice.

The biggest mystery about Crooksy is why everyone, including us, thought this central/attacking midfielder was a defensive midfielder/defender. Crooks has confirmed he is much more a Graham Dorrans than a Ryan Jack and quite why we signed him as a DM and played him as one and made him look like a fool as one is something only Mark Warburton knows. He excelled at Scunthorpe on loan then clinched his permanent move to Northampton Town.

One cannot see on-loan St Johnstone forward MOH getting back into the picture at Ibrox. He, like McKay, Garner and just about everyone else we got rid of scored the winner on their debuts for their new clubs, begging the question of why he could not do it for us! He is still contracted to Rangers till 2020 like Halliday so unless St Johnstone give us our £500k back he will return in January.

Pedro confirmed last week that the misfit defender was close to a switch, and indeed Phil Brown’s Southend United snapped him up for the usual ‘undisclosed’ fee (probably around £200K). He was a decent guy at Ibrox, but up there with Cribari as one of the worst stoppers we have ever seen. Looked thrilled with his switch to the Boot and Laces Training Ground (!). Rangers’ departure statement was less than warm though.

A quick sale; pleased with their first purchase in Garner, Ipswich came back for more and bought Waggy for a massive profit – he cost Rangers £200K, and we sold him for five times that. A maligned soul, nowhere near good enough for SPL, and that fish and chips episode in Giffnock will be the overriding memory, but we wish him luck.

It looks like he will simply be released – he was an initial six month signing, having been considered surplus by Doncaster in January 2016, and history appears to be repeating itself. Burton Albion are said to be on standby ready to snap him up and he has been told by Caixinha to find a new club.

And truthfully the only other contender to depart now is Joe Dodoo (appears to simply not be in Pedro’s plans).

The exodus is effectively complete now and we await to see if anyone else appears on the horizon to come in.