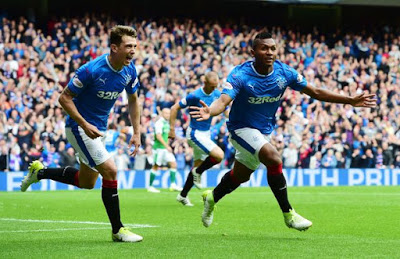 So as every man, woman and their dog know, we lost to Hibernian today. Much had been made of the gravity of this fixture leading up to it, and to call it an eventful 90 minutes is not quite doing it justice.

Ibrox Noise takes you through the key aspects of Rangers’ second SPL result of the season.

Once again we are fast out of the traps. We are scoring early in matches and maintaining a significant level of dominance and good football, but only for around 25 minutes. Unfortunately we are not converting that early superiority into goals – the one exception this season was of course Dunfermline where the match was out of Allan Johnston’s men’s hands pretty quickly, but Hibs and Motherwell are significantly superior to the Pars. For the good part of a half hour, Rangers are very enjoyable to watch and it looks like the Rangers we expect.

While we still got the three points at Fir Park, it was a hard graft. Unfortunately today we showed a real inability to recover from a set back. And the disappointing aspect is the setback in question was not Ryan Jack’s mysterious sending off, but Murray’s leveller. Hibs, worryingly, were already in the ascendancy thanks to that goal and while Jack’s dismissal clearly influenced the game, it came a good 15 minutes after the equaliser. Rangers have to figure out how to maintain form even when a goal is lost.

Yeah we have no idea what it was for either. If for the tug on McGeouch, then I am at a loss as to why Stokes was only booked for his mild assault on Tavernier. If not, then we really are in the dark – it appears a poor decision, although naturally we will never know if it really changed the game that much.

We cannot be the only ones to be a little concerned at how Josh Windass is disappearing every match after that half hour period. For 30 minutes he tears the opposition a new one, but then somehow just drifts completely out of the match and has little influence thereafter. The boy has obvious talent, but seems to struggle to keep it up.

He is clearly Rangers’ best player – there is no contest. He remains influential, gritty, classy, and leads from the middle – the money shelled out for him was a total bargain and he is a player we can trust. He was everywhere today – defending, attacking, pulling strings, and did all he could to fill in for the loss of his partner. We all dream of a team of Graham Dorrans. We really do.

Something still is not right back there. Tavernier’s isolation for the first goal, in concert with Alves in no man’s land while Cardoso completely missed his tackle, defence still is not clicking yet. And add to that a few occasions where the senior Portuguese was well beaten in the air, the backline just is not quite where we hoped it would be. Not yet anywhere. Alves also needs to work on his aimed clearances – most of them go back to the opposition. He also needs to try to avoid the red mist descending – he appears too eager to get involved with altercations. And Hibs’ second goal saw pretty much everyone in no man’s land – Tav was unlucky with the OG, but the organisation left a lot to be desired.

We were not sure about this kid after his earlier displays, but three goals in two matches suggests Pedro was onto something. He is a strong lad and has upped his workrate too – not completely in sync yet with the Scottish game, he is significantly improving. Reminds yours truly very much of Ally McCoist’s striking style – right place right time. If he ends up a 10th as good as Super, it will have been a fine signing.

Fans are a little unhappy with the Mexican striker – he appears to be struggling with the expectation around him and is not fitting Pedro’s system yet. His performance in the second half appeared to lack much purpose and I might be viciously in error and apologies to the lad if I am but has he actually had a worthwhile shot yet in a Rangers shirt?

He has taken to the LB slot impeccably – I cannot think of a foot wrong the Northern Irish international has put since replacing Wallace, and will have felt a little aggrieved at being sacrificed for the formation switch at half time.

The guy’s crossing is poor at this point – while he did assist nicely for Morelos’ opener, he needs to work on his open play equivalent. Too many of his attempts are wildly off target. But his all round play is hard working and he does not hide – so our criticism of him is reluctant. We like players who try.

11: John Beaton is a terrible ref:

Yeah he really was out of his depth in this one. I am surprised such a well-known maligned referee was given such a big fixture, and he got more wrong than right. But he was refereeing both sides, we hope…

This was a fixture we were a tad cautious about, and while many will point to the Jack red as a turning point, and it did make a difference, it did not tell the whole story of the match. Rangers remain a bit off where we need to be, and it only eases up a tad next week with the visit of a slightly out of sorts Hearts.

It is a work in progress.