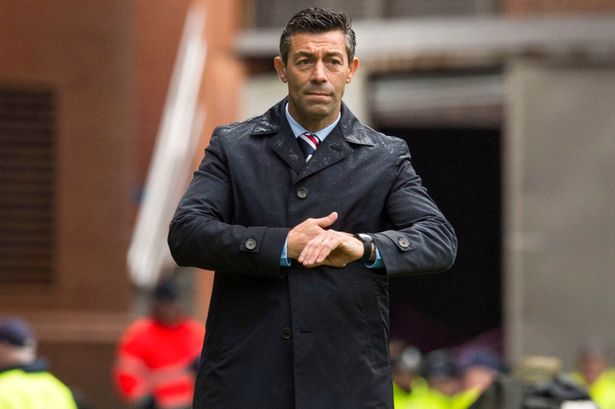 To attempt to restore Rangers back to the force they once were, the Board will have to admit they took a calculated, dangerous risk and as it turned out, they made a monumental mistake by hiring Pedro as the new Rangers manager.

After the last gamble of signing Englishman Mark Warburton, why would you rush into another and possibly an even more speculative move to bring in Portugal’s Pedro Caixhina to Ibrox? It didn’t make much sense to me at the time, and it makes even less now.

He promised them the stars and produced mostly disasters. He obviously talked a good game at his initial interview and informed them of the Mexican & Portuguese international players who he would deliver to Glasgow to “Make Us Great Again”. It all sounded good and it was different, so they fell for it – aw naw – I couldn’t believe it at first.

Due to the lack of money involved and the difficulty of the language barrier, I would take Caixhina out of the direct firing line before the points difference hits double figures, which is now looking inevitable to happen during the month of September.

Motherwell was a hard fought must-win game, that we were fairly lucky to prevail in – as proven now – and followed it up with two unconvincing home results and performances; it proves that we are miles away from being a good solid side.

I would urge the board to bring in a former EPL (names on a postcard) competent manager and use Pedro as his first team coach. The buck stops with the experienced manager picking the team and how they will play and hopefully Pedro is a decent coach who could help improve every player attached to the club, by being more usefully deployed on the training pitch.

We clearly require a workable 4-5 year-plan to challenge for honours and to play regularly in Europe competition to build up the money required to enable Rangers to really contest the league positions. At the moment we are 5 points adrift of Celtic, Aberdeen and St Johnstone and the Blue Brigade will not tolerate that situation for long.

Some fans want Alex McLeish (Ibrox Noise can confirm Eck was the choice of at least one legend of the club) or Walter Smith, with their experience of Scottish football, and to me that would only be a short term answer to stabilise the ship, but I wouldn’t say no to either of them. In fact, my original choice was Alex McLeish and Barry Ferguson as his assistant and I don’t think they could have done as badly as Pedro has.

Due to Warburton signing too many players that found playing for Rangers a step too far, Pedro had to go more for quantity in player recruitment rather than the quality a team the standard of the ‘Gers requires.

Now he has to figure out a way to get more out of what he’s built. Good luck Pedro!