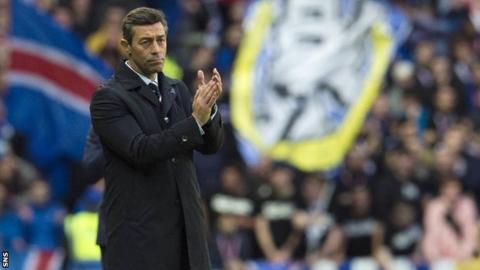 I have been going to Ibrox since 1960 and I can tell you that Rangers have always been slow starters, and it has annoyed me for years! I used to put it down to starting the season too late with the players having far too long to relax on their holidays.

I worried about players not keeping themselves fit enough during the break and some of them putting on weight. I also questioned their professionalism at times.

I was obviously wrong because, with our Portuguese coach in charge, the break was only 2 weeks and we still didn’t look sharp enough against the minnows of Luxembourg. Actual competitive match fitness is the main problem following a few friendly pre-season style of games, with nobody wanting to get injured.

Pedro talks about preparing his players for a high-pressing game and what did we get from the team he picked? The same old plodding and ponderous build up style of possession play that we witnessed a lot last season from the bread man’s team, again with no real penetration.

The Ibrox match was played by basically Warburton’s team with the exception of loan signing Dalcio from Benfica B side, replacing Barrie McKay, with Fabio Cardoso in place of Clint Hill, who was our best defender last season. Young David Bates took the place of outgoing Rob Kiernan. The only other change was Ryan Jack replacing loan Ranger Andy Halliday, but the strange thing was the team played almost exactly the same football as Warburton’s teams.

Why can’t Ped the Ted get more out of his players than Warburton and Graeme Murty did? What’s wrong with him?

I have to say that the goal was pure class, well done, Man of the Match Niko Kranjcar who spotted the quick-thinking run of Kenny Miller who slotted Niko’s slide rule pass beautifully past the goalie and into the back of the net. What a huge bumper roar it was that went up to celebrate a great move and the decisive goal on the night.

The fans were fabulous with a wonderful, expectant crowd who sold out Ibrox, because they wanted to see all the new players Rangers had signed over the summer break.

What’s this line-up? They all thought why only 3 (2 foreigners and 1 Scot) out of a possible 7 new signings (because Alves was in Russia, playing for Portugal) in the starting 11. What’s that all about? I know loads of the fans were really gutted when they found out how few new players were selected from the start.

It was also the same reason for all the fuss and the attraction of all the Rangers clubs throughout the world. They were desperate to see all the new stars playing for this new Rangers side, all paying to see this game live on TV.

I couldn’t believe how average the team were playing, with the exception of how good 32-year-old, Croatian Niko Kranjcar, played having been out of football for the last 7 months with a cruciate knee ligament injury. Incredible passing performance taking everything into account.

I pray he is fit to play in the return leg on Tuesday. After his first competitive match since last year, it is obvious he will be a key player for us this season. He sees passes that nobody else has shown so far, and hopefully some of the new boys have the talent to make us great again. Unfortunately Pedro has indirectly conceded that Niko is likely only a 60-minute player, as Ibrox Noise pointed out in a previous entry.

Ryan Jack and to, a lesser extent Jason Holt, did all the necessary dirty work in the engine room to allow Kranjcar the freedom of the park, for the first 50+ minutes of his display, which was simply oozing class.

English language difficulties will take a long time for the Rangers team to resolve, so let’s hope that with Bruno Alves, Fabio Cardoso, Daniel Candeias and Dalcio all speaking Portuguese, and both Mexicans, Carlos Pena and Eduardo Herrera along with young Columbian Alfredo Morelos all speaking Spanish communication between all players is as trouble free as possible. It will still be difficult for the English speakers to communicate well with their new team mates.

I am predicting that Ryan Jack will now be a fixture in the ‘Gers midfield with the talented Jordan Rossiter pairing up with him (if he can stay fit). Jason Holt is not a defensive midfield player and Rossiter is – simple as that Pedro!

Ibrox Noise are concerned about James Tavernier and Lee Wallace as our first choice full backs as their form was poor last season, and to be perfectly honest, I thought they were very average again against Progres Niederkorn.

The few times Wallace got himself free down the wing, he hit the ball in the direction of the penalty spot rather than place the ball to an incoming forward; his crossing, as has often been the case of recent seasons, was pathetic. Tavernier’s tackling is no better and it, along with Bates’ poor positioning caused Foderingham to make his only save of the night – and he made a mess of it.

Once the team get to know each other’s play a bit better and realise exactly what their own jobs are, the better they will play as a unit – just make it quick – please!

Only a fool would draw too many conclusions from Thursday night’s display that fell significantly short of expectations for the home crowd, but I am confident we can finish the job on Tuesday to (likely) meet Ael Limassol in the 2nd qualifying round, especially if we score an away goal.

Alves will probably be playing for Portugal against Mexico in the battle for 3rd place in the FIFA Confederations Cup on Sunday 2 July, so it might be too tight for him to make the Rangers match on Tuesday 4 July, unless he loses his place in the team to Pepe. If he doesn’t play in the game, he could fly from Russia to meet up with the team in Limassol (Or Gibraltar).

I would play Hodson instead of Tavernier at right back because of his amateurish, woeful tackling and his non-existing positioning sense of defending. He is a complete liability in the No.2 position (ask Sinclair of Celtic) and Pedro and Warburton don’t seem to notice that fact.

Demote Holt to the subs bench, because Rossiter is a far superior all-round-player and a talented tackler and passer of the ball. Maybe Murty could explain it all to Pedro.

If Pedro is trying to protect young-injury-prone Rossiter, then take him off after 60 -odd minutes, but play your best players at the start of the game, as we MUST go through to the next round.

Drop loan-signing Dalcio for Miller as he reads a game very well and is too good to omit at this moment in time.

Ibrox Noise is interested to see your comments on your starting 11 for this Tuesday’s game in Luxembourg?