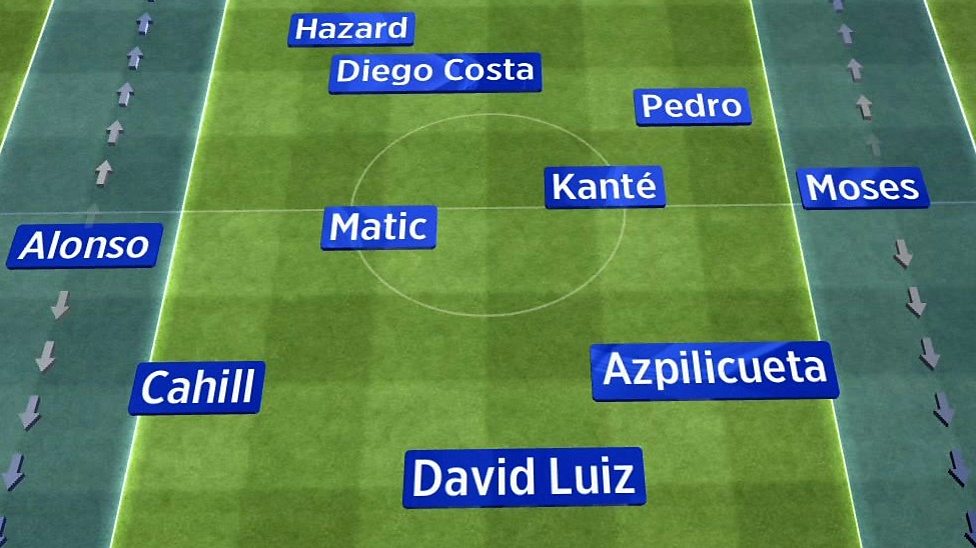 I suggest Rangers taking a leaf out of Chelsea and Arsenal’s books as they changed their playing styles from the usual back-four formation to a much harder to beat three at the back with two hard working wing-backs, vital to the success of this move.

For those ‘Gers fans that will tell me that we are the Rangers and we should always be an attacking team, well what do you think Premier league winners Chelsea are?

Also Arsenal started to win more games immediately after changing the way they played with their new three at the back, and won the FA Cup because of it!

CHELSEA EXAMPLE: 4-2-3-1 under Jose
Petr Cech; brilliant tall goalkeeper, Branislav Ivanovic at RB, as part of a back-four with John Terry, Gary Cahill, and Cesar Azpilicueta who was signed from Marseille in Aug ’12 as a Spanish right back, but was played at left back.

Installed Thibaut Courtois their 6’ 5.2” Belgian goalkeeper, moved Cesar Azpilicueta to play right centre half, David Luiz from PSG to play central centre half and Gary Cahill to play left – centre half and dropped captain John Terry to fit Luiz in.

N’Golo Kante signed from Leicester in Jul ‘16. He is a tough-tackling, energetic defensive midfielder, who breaks down attacks, wins the ball and distributes it well.

Marcos Alonso, the 25-year-old Spanish left-back signed from Fiorentina on 31 Aug 16. He was the first defender recruited by Conte, to be his new left wing-back when Conte introduced a hard-working, versatile 3-4-3 system to Chelsea.

So what do we do with this current Rangers squad? Who do we sign in the near future for this proven better way to play?

Foderingham, the 6’ 1” keeper must be replaced (ASAP), as he is NOT good enough or tall enough for a title-winning Rangers team. Good shot stopper at times, but his positional sense is dodgy and he is completely hopeless at crosses.

Three at the back: The Ibrox side must buy another tall, quality centre half to play alongside Bruno Alves and Fabio Cardoso. David Bates & Danny Wilson as back-ups for loss of form or injuries.

Two wing-backs: Possibly James Tavernier or Jason Holt or Dalcio Gomas for the right-wing-back & Lee Wallace (NOT Captain) or Josh Windass or Daniel Candeias for the left-wing-back

When Rangers have the ball it requires Dalcio and Candeias (or whoever plays in the wing-back position) to get forward & support the striker, along with Kranjcar/Walker, Peña & Dorrans, pouring forward to attack and help Herrera/Morelos at every opportunity.

As soon as we lose the ball, everybody has to work hard to win the ball back & then start attacking again.

So let’s cut to the chase; this system would make the Light Blues much harder to beat, especially at Celtic Park, Pittodrie, Tynecastle and Easter Road, and that to me answers my question. Rangers have to be open to trying new things.

Ibrox Noise has recently been discussing formations – we feel Pedro is most likely to go 4:2:3:1 but this 3:4:3 is a robust and reliable alternative.

Radical, but it could work. What do you think folks?