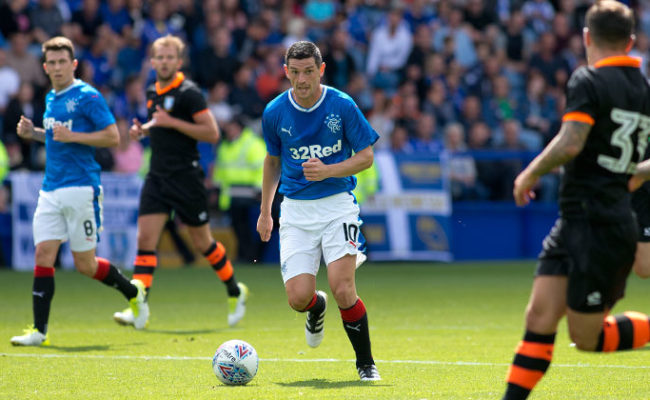 Knee jerk reactions are bad. Last summer we saw the likes of Joey Barton, Philippe Senderos, Jordan Rossiter and Niko Kranjcar arrive at Ibrox and we allowed ourselves to buy into the idea our side was in with a sniff of the title.

I mean, when you look at the calibre of player on paper that was now on Rangers’ books, it was not a completely insane notion. However, being completely routed by Burnley with a number of these new players in the team was a damning omen to the disappointing season Rangers would have before Mark Warburton packed up his stuff and exited by the back door.

And if we had only gone with the likes of Niederkorn, The New Saints, St Johnstone et al in terms of this pre-season, signs would be looking something below ominous too.

But over the past three friendlies, against three of the best teams Rangers have faced over the past half decade, there seems to be a truly unexpected and borderline seismic shift in the direction of competence.

But… the difference the likes of Graham Dorrans, Ryan Jack, Daniel Candeias and Bruno Alves are making to the core of this team cannot be overstated – they are only friendlies, but if we had lost them all 5-0 fans would be in meltdown saying the team was a joke. Just like we all did when we imploded in Luxembourg.

Equally we have to praise what is happening in the event of winning two of them, and gaining a very credible draw in the other.  Somehow it really is clicking – after a stuttering slow start, Pedro Caixinha seems to have settled on a 4-4-2 and the base spine of his team (Alves, Cardoso, Jack, Dorrans and Candeias) is making a big, big difference to how matches are going.

I am not going to say this is as good as a Rangers team should be, but it is a hell of a lot more like one than the dross we have suffered under McCoist, Warburton and initially, Pedro with Warburton’s squad.

Now Pedro has brought in his own men and full credit to the man, he really does seem to be turning a mini fan meltdown around and is getting more and more fans onside. Including yours truly.

We see what he is trying to do – an old-school formation with strong and reliable leaders down its middle while Candeias tears up the right wing and Herrera pressurises defences.

And yes yes yes! We get it! “These were only friendlies“. But going to Hillsborough and frankly strolling to a comfortable win over a strong Championship side on their patch is unheard of over this recent disappointing era at Ibrox. Just like at Watford, and just like when we hosted Marseille.

This team looks like it actually believes in itself, and each player understands their role.

However, we must urge just that little bit of caution. Before we all get too excited, we have had false dawns before – think back to Easter road in July 2015. We honestly though we had it made that day. Equally Easter Road under McCall made us think we might just get out this pit too. Alas we did not.

So let us not assume it is all sorted.

But we have managed to turn a potential corner right on time for the opening match of the season at Fir Park – and that is the litmus test of progress. If we can travel up to Steve Robinson’s men and produce the quality of display in a hard-fought competitive environment that we have in our last three outings, we might just be able to believe this team is on the right track.

If Hamilton opening day of last season was an accurate forecast of the season ahead, then Motherwell could well be too.

The signs are amazingly better than they were after that dismal loss to St Johnstone. But we need to take it into the action that matters.

Pedro, you are on the right track mate. The players are really looking the part as things stand and momentum has suddenly swayed our way.

Let us pray it keeps doing so.