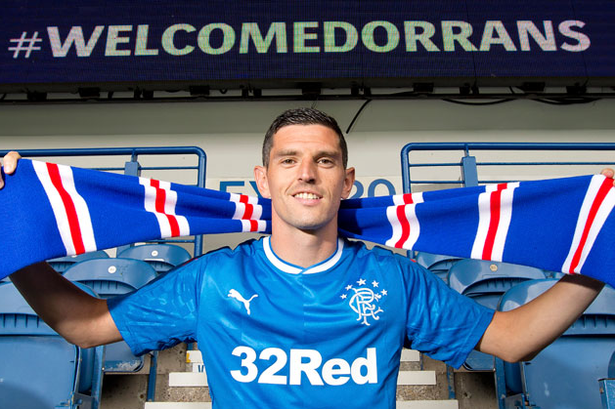 After the earlier flurry of transfers in the summer window activity, Rangers were dealt a bit of a blow with the untimely Europa League exit. However, that coincided with the latest incoming capture, and he, along with three others, could be pivotal this season in making Rangers seriously competitive again.

I am referring to Graham Dorrans, of course, but in conjunction with defender Bruno Alves, midfielder Ryan Jack, and striker Kenny Miller. While few would make a strong case that Rangers as a whole are ready to really push at the top of the table, there are grounds that these four men are the difference between midtable obscurity and a serious fist at the SPL summit.

In each player, Rangers have a critical and relatively ‘marquee’ name for each position of the pitch, namely defence, defensive midfield, attacking midfield and up front, and that crucial spine, while not a certainty for success in itself, is certainly pushing in the right direction.

Last season Rangers’ defensive woes were laid bare as countless teams got joy against the likes of Rob Kiernan and James Tavernier, woes which had been hinted at in the Championship but rarely truly exploited.

But in the SPL Rangers were far too open and few can deny the potential influence a guy like Bruno Alves can have there. For a start, he is fluent in both English and Portuguese, the only player in the squad who is, and that gives him a bridge between both the British players in the squad and the Hispanics – a rarity and a useful commodity.

His communication skills will be essential this season. Add to that his glittering CV of playing experience at the highest levels football has to offer, a level he is still entirely comfortable at at the ripe old age of 35. Just ask Arturo Vidal, Carlos Bacca, Alexis Sanchez and Paolo Dybala not to mention Gonzalo Higuain and Dries Mertens. Fans less familiar with him certainly saw what is on offer when he eased his way through this summer’s Confederations Cup.

Then we have in front of him a player with the best years still ahead of him. Ryan Jack is the leader Rangers’ midfield has been lacking. With questions over Lee Wallace’s influence on the pitch as a communicator, and a complete lack of genuine captains in general in the middle of the park, ex-Aberdeen leader Jack is a strong, hearty, genuine midfield anchor who at only 25 has plenty of potential for further growth and is proven to be a player others will look up to and lean on. While not exceptional (who was?) during Rangers’ tie v Niederkorn, the DM was one who was able to hold his head high after putting in a good shift in the first leg followed by a reasonably decent one in the second. He is mentally strong enough to play for our club.

In front of him though is another piece of the jigsaw. With Niko Kranjcar’s fitness a huge concern, and his consistency another, Rangers needed a strong and reliable creative outlet – something we have not had in that area of the pitch at all since 2012. Kranjcar simply does not have the lungs for it, while Graham Dorrans is just primed to fit in there. Rangers were in dire need of a robust and mobile creative man, and the Scotland international is a fantastic fit – he has easily been this summer’s most welcomed purchase.

And last but not least Kenny. Everything has been said about him so we will not waste your time repeating, but like the other three, he is a leader, and in his case like Jack and Dorrans, and in time hopefully Alves, understands what playing for this club means.

In three slots, right down the middle of the team Rangers now have at least three genuine leaders – four if we do indeed include Dorrans, and I think we can. Five if you want to add Wallace albeit some might not. But the inescapable point is that last season’s abysmal lack of voices on the pitch has now been addressed with some really high calibre recruits.

Given the right coaching, Rangers could well turn this UEL disaster around into a fine recovery for the season.