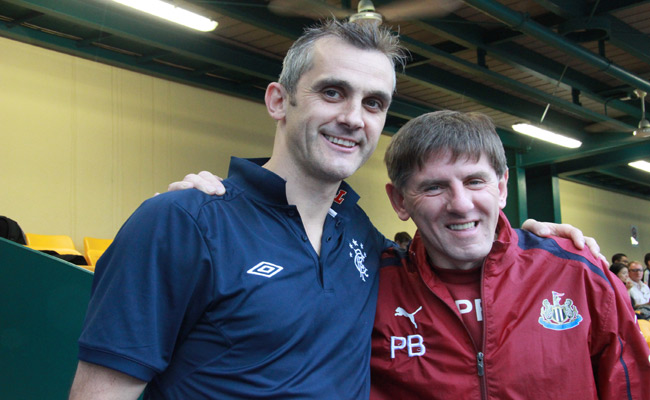 Steve Walker our clever and meticulous Rangers physiotherapist earns his money by properly diagnosing each player’s injury problems and working hard with every one of them to try and get them as fit as he can. His job is to get them ready to  train again and to supervise them until their full recovery.

Niko Kranjcar sustained a torn anterior cruciate ligament last October, and thanks to Steve Walker he managed to get Niko’s injury sorted out and also ahead of his scheduled recuperation period. Together they won his fitness battle and he has already been training well for the start of the new season.

Jordan Rossiter is another player who after 9 months out is finally fit enough to resume full training with all the other players. He endured a horrific first season of injuries after suffering a series of recurring back, hamstring and calf injuries.

Steve and the medics believe that they have finally fathomed out what was wrong with Jordan and causing him to endure too frequent injuries. Thankfully they noticed that he had an imbalance problem which hopefully they have now sorted out for good.

Lee Wallace was advised about the need to have surgery on his stomach to finally clear up his on-going injury, which meant he had to miss the run-in. It is vital for the players that Steve knows the correct choice of treatment for every player.

Lee has now fully recovered and has trained with the team on their first day back at the ‘Gers training ground in Milngavie.

A few years ago, Ally McCoist offered Craig Gordon the Celtic and Scotland goalkeeper to come to Murray Park to recuperate from his career-threatening knee injury. This situation came about through Craig’s friendship with Jim Stewart, the Rangers and Scotland goalkeeping coach at the time.

Craig is the first to admit that without the skills and patience of the very talented Steve Walker, he probably wouldn’t be where he is today. It was certainly a long-term injury and boy did it pay off – for Celtic and not Rangers.
The keeper admits he owes a debt of gratitude to Rangers for his very successful rehabilitation and bears no grudges over McCoist’s failure to offer him a playing contract, stating that Ally felt he had to strengthen other areas of their squad first.

After a full year out injured, McCoist felt that Craig might have broken down at any time during his comeback period. Rangers were not convinced he still had it in him to come back as a top flight keeper again.

What a stupid mistake that was – mind you – McCoist made so many of them.

But thanks to Steve Walker and his team, players like Jordan Rossiter and Niko Kranjcar can look forward and not back, and finally play the role for Rangers long overdue.