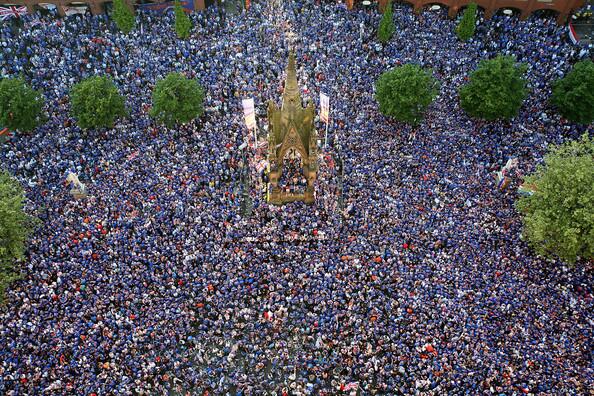 After five long years in the European wilderness Rangers are ready to face Progrès Niederkorn at Ibrox on Thursday 29 June, for the first round qualifying match of the Europa League. Even although Rangers are the favourites to win the tie easily, it hasn’t stopped the fans from wanting to be there in their thousands, to see our new signings play in the match.

The tickets are flying out the door for Thursday night’s showdown and the enthusiasm being shown by the Light Blues football army is amazing. We are all desperate for a successful run in this tournament, as the further we go, the more money we can gross and the more games for the fans to follow follow (we will follow Rangers, as the song goes). See what I did there!

For the return match at Luxembourg on Tuesday 4 July and only 5 days after the home match, the #Toryglen True Blues are having to lay on a double decker bus to keep all their travelling fans happy. It is called supply and demand.

If you know any of the members or you want to go to the game with them and have yourself a brilliant fun experience, please get in touch with the 20 Club Rutherglen. The regular troops who travel to the European away games all have such a good time representing Rangers fans abroad. That’s why they continue to go so often.

This could be the same situation with some more of the UK Rangers supporters’ clubs, especially if they have the same enthusiasm shown by the Toryglen True Blues.

I still remember Barcelona in 1972 fondly and I will never forget the laughs and pleasure we experienced in our Magaluf hotel where the 14 of us were staying for a 10 holiday. It took us 3 days to get to our hotel in Spain and the same again to get home, as we were crammed into a 12-seater minivan – but hey – the memories are still with me!

My son and I were lucky enough to get tickets for the 2008 Manchester Uefa Final, and we travelled down on the Tuesday and the city was packed with our supporters everywhere, but on the Wednesday of the game, I estimate the Rangers family became very close to 200,000 people. I saw an amazing amount of different Rangers strips from through the years. There were fans of all ages, grandchildren to grandfathers and lots of females also followed the team to Manchester.

There were umpteen Orange bands in attendance, marching proudly into the city centre where most of the fans had gathered for the day. It really added to the atmosphere, which was truly amazing. I thought it was a magnificent show of strength from everyone involved.

5 years is a long time for a National Treasure like the famous Glasgow Rangers to be out of European football, so how did it happen?

In 2012, the petty-minded SPL, SFA and the SNP-led government showed the Gers no mercy and almost committed Scottish football suicide by sending the giant club down to the-then Third Division. They committed this idiotic act despite the Teddy Bears holding the world record of most title wins ever amassed, and obviously being the most successful team ever produced in Scotland.

What did Rangers do wrong? They ran out of funds and owed people money. This happens to a lot of teams, so what punishment do they get? Very varied. Has any other team been put down to the lowest league possible? None. That seems an incredibly cruel punishment for overspending money does it not? And it is almost as if it was intended to put Rangers out of business altogether.

If it wasn’t for the best fans in the world, the light blues would have been allowed to become defunct. We wouldn’t let it happen and in a sensational show of strength, we packed Ibrox for every game – hats off to every one of us who did.

Can you imagine what would have happened to Scottish football if Rangers did not exist anymore? Celtic would have walked away with the silverware forever.  Now, for the last 5 years, the SPL has become the least competitive league in the world, and it serves the SPL right.

The only team to prosper during this period was Celtic and even their takings were substantially down, forcing them to become a selling club when any English team came in for their players.

Secretly, Scottish football will be delighted Rangers are back in Europe – over time the co-efficient will rise, TV money will increase, and global exposure will restore, as it began to with the ‘return’ of the Old Firm.

As for Thursday’s clash, Ibrox Noise would be very interested to know how many other Rangers Supporters Clubs are preparing to travel to the Niederkorn first leg on Tuesday 4 July, and what the demand has been.

Hit the comments if you have any thoughts on this.