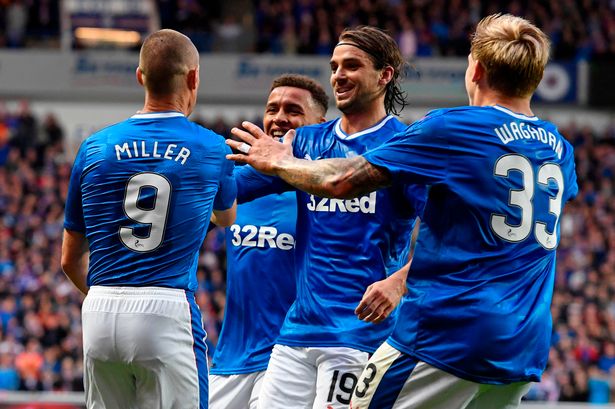 For those underneath a rock, Rangers made their long-awaited return to Europe last night, in a match under the glare of the spotlight. Much was made leading up to the encounter about how Rangers would and should stroll this match, with scorelines expected in the region of five or more.

Pre-match, Rangers’ ex midfielder engine man Alex Rae concurred with this and declared a comfortable night for the Ibrox men, and a glut of goals.

But as we know, life is not that simple, not that binary, and an odd evening in Glasgow’s south side taught us a bunch of things about our team – some we patently already knew, others fresh to us. Here is your Ibrox Noise guide to the good, the bad and the indifferent.

Niko Kranjcar. Let us peak. Let us get the highlight of the match out the way first. While some of Kranjcar’s skill was a touch of luck with a few breaks of the ball here and there (the ball accidentally bounced off his shin at one point to keep a dribble going), the 80-time cap Croat was a class above anyone else on the pitch. For the first 35 minutes his passing was radar, picking runs out with ease and effortlessly holding possession. Rangers have missed a quarterback like this for a long time, and while he is reaching the end of his career, he has a few years left. Easily the best part of the match, and as he tired into the 50th minute, Rangers lost their way.

Which takes us onto Niko Kranjcar. Let us get this elephant in the room out there. The guy cannot last. Even last season when he was just gaining fitness he was out on his feet by about 65 minutes in matches and incapable of contributing any more. He has a real problem with stamina and has rarely looked productive deep into second halves of matches. Here is hoping the team at the Rangers Training Centre can get more out of him because as we saw last night, no Niko, no Rangers.

Martyn Waghorn. There was barely a Bear whose heart did not sink when he was named – but it was predictable. And he was a ghost for his entire night. Ibrox Noise has advocated the end at the club for him, much to general agreement, but he still seems to be there. What do we have to do to get this guy out the squad? A failure at this level completely, pure and simple.

Jordan Rossiter. Biggest smile of the night was the sight of the chirpy wee Scouser finally coming on. And he looked energetic, unaffected mentally by his spell out, and hungry to get involved. Why he did not start is beyond me. He should have.

Jason Holt. He did not bad last season in the DM position but it beats me as to why he started when we had Rossiter on the bench for that slot. He is an honest pro, who gives his all – but that is not enough for me and it is time Holt sat on the bench.

Formation. Only Michael Stewart, a raging Hibee (and probably tim) called it right – all the media seemed obsessed with Rangers being in a 4:3:3 last night, but it clearly was not. It was indeed a 4:2:3:1 with Holt alongside Jack in midfield while Miller, Dalcio and Kranjcar were the three up top behind Waggy. Ibrox Noise got the formation right with three selection mistakes (Waggy over Morelos, Holt over Rossiter, and Dalcio over Pena).

Defence. Thankfully Progres did not threaten too much overall but when they did, Ranges’ backline was creaky. Bates was weak under pressure, gifting them an easy chance they nearly scored from, while Tavernier was perpetually in attack mode and only Cardoso had a decent night. As we have warned, to much protestation and abuse, this defence is not ready yet. Bruno will make a difference, yes, but with Wilson out till August, Bates is not good enough in backup. Not for us anyway.

Dalcio. Not consistent enough. Showed flashes now and then but created next to nothing and faded in and out. Good first 15 minutes then disappeared till about 70. Did not appear much better than the man he might arguably be replacing in McKay.

Jack. Comfortable night and fairly strolled it – looked perfectly in his element at Ibrox and did not wilt under pressure. Has a tough job in defensive midfield for this club but might just be the anchor we have sought for long enough. Easy to see why Pedro wanted him as critical priority.

Morelos. Lack of service did not help, but if this was a sign of things to come, he has ground to make up before he convinces. Hopefully it was an off night but he did not look like he even wants to be here. Had a lazy unenthusiastic look about him.

Candeias. An average cameo. Spent too much time infield and next to none on the flank. He is a winger, right? Made one good run which nearly yielded a goal, and tried to prove to everyone how energetic he is by charging down a defender (who he fouled), but this was a patchy debut at best.

Cardoso. While not quite at the level of his soon-to-arrive countryman Alves, he looked more assured than his partner. Seems strong in the air, with good positional sense, and should have bagged a goal but for a fine save. This could be a good partnership once it gets going, but it needs cover.

Overall this was Rangers’ first night out of the new season, and naturally you want to accommodate for that. Celtic lost to the Imps last season and went onto stroll the title. But they lost out there. Rangers are yet to travel. The display last night was not a disaster, but for any Ranger who expects the best from their team, at this level, the result arguably was. This was not a third round Champions League Qualifier against AEK Athens like in 1994 when we were beaten rather easily by an underestimated Greek side – this was a really weak version of Luxembourg’s St Johnstone in the first round of the Europa League. At home.

And it really was worrying to watch Rangers’ impotency up front for 35 minutes despite the creativity from Kranjcar, and how Rangers faded so badly as the Croat did. The second half, however you dress it up, was rather poor, and for all the patronising Scottish media claiming Progres will be happy to have only lost 1-0, the truth is they will be disappointed they did not get anything. And that is a damning indictment.

The reality is the selected XI was pretty disappointing to see pre-match – all these signings and only three started, leaving mostly the old guard from last season that already was already not good enough. This was not a great sign.

We are RANGERS. We should not be happy with such an underwhelming win when pre-match fans and media alike were talking a cricket score. For this site, there were definitely bright spots, which we have just highlighted, but the negatives were troubling. The same old problems which far better teams than Progres will exploit.

Hopefully Pedro will figure these issues out before they become a serious cross.