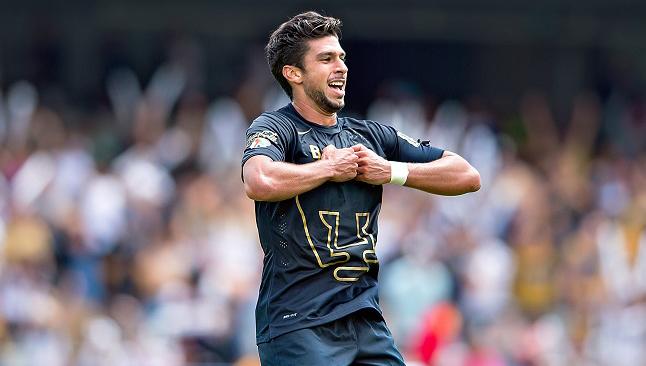 Rangers’ business in the transfer window this summer is reaching fever pitch, which only highlights how badly surgery was needed. And the latest name to be said to be close to signing on the dotted line is another Mexican import.

Eduardo Herrera is 28-years-old and a Mexican striker who is reputed to be a 6’ 1.5” forward and is currently on loan to Tiburones Rojos de Veracruz from Pumas de la UNAM, who also play in the Liga MX (Mexico’s Premier League).

He has played in Veracruz since January 2017 and has played in the last 13 games and scored 3 goals and it is reported that our manager Pedro Caixinha has stated his interest in bringing him to Ibrox for the start of Rangers season, with claims the deal is only a medical and permit away from completion.

It is believed that Pumas will probably allow Herrera to leave in the summer, if Rangers and Pumas can agree on a reasonable fee.

Fox Sport Mexico correspondent Francisco Montes claimed on Twitter that Caixinha has been interested on a swoop for Herrera since he took on the Rangers job.

Pedro rates the striker highly and he worked with him in season 2013-14, when he took the player on loan from UNAM, when he managed Santos Laguna, of Mexico three years ago and he played in the last 23 games of the season and scored 4 goals.

Pedro knows that there is so much more to Herrera’s game than scoring goals. He leads the line exceptionally well and brings people around him into the game. He is an intelligent footballer and also contributes greatly with the free kicks and corner situations, helping the team at both ends of the park.

In season 2015-16, Herrera played in nine Mexico internationals, and scored a very respectable 5 goals for the side, but he has not featured since the 2-0 friendly win over Senegal in February 2016.

There is a feeling with Pedro that Herrera might have gone a bit stale playing in Mexico so long and that by coming to Ibrox in the summer it might galvanise his goal scoring exploits and stimulate him back to playing his best football – of which he is most certainly capable.

By all accounts he is a very talented footballer and this move can give him a new impetus, so that he can find that new stimulus and a welcome challenge to lift his career to a new level.

It will be interesting to watch a top Mexican international player performing and scoring goals for Rangers in the near future.